Does melanoma always develop from a mole? Can melanoma be pink? Read on to expand your knowledge of the disease.

Compared to other cancers, melanoma may seem fairly straightforward. But there’s more to this disease than meets the eye. Dermatologist Ashfaq Marghoob of the MSK Skin Cancer Center Hauppauge shares some facts that you may find surprising, and even helpful, as you prepare to keep your skin safe from the sun this summer.

This story has been updated from its original posting date of May 29, 2019.

1. You can develop melanoma even if you’ve never had sun damage.

Staying safe in the sun and not using tanning beds are two of the best ways to prevent melanoma. That said, around 30% of melanoma is not related to the sun or other UV exposure, says Dr. Marghoob. “Someone can have minimal sun damage and still develop an aggressive melanoma.”

This includes melanoma on the skin as well as in the eyes, mouth, and genital region. “The underlying cause of these melanomas has not been fully explained, but genetics likely plays an important role,” says Dr. Marghoob.

2. Most melanoma does not start in a preexisting mole.

Melanoma can develop in a preexisting mole, says Dr. Marghoob, but nearly 70% of skin melanomas do not. Rather, they occur in normal skin. “Moles themselves are not cancerous, and it is extremely rare for a mole to transform into a melanoma,” says Dr. Marghoob. That said, he adds, having many moles helps identify people who are at an increased risk for developing melanoma somewhere on their skin.

Experts estimate that fewer than one in 10,000 moles will become melanoma.

Since most melanoma develops on normal skin, Dr. Marghoob stresses the importance of protecting the entire surface of the body, including areas with many moles and areas without any moles. “Some people use sunblock only where they have moles because they think the moles themselves are dangerous,” adds Dr. Marghoob. Stay safe by applying broad-spectrum sunblock with an SPF of at least 30, wearing sun-protective clothing, or using a combination of the two approaches.

3. Melanoma can be colorless.

While it’s true that many melanomas are dark brown to black in color, some melanomas have no color and appear as pink spots or bumps. “Beware of isolated pink spots, especially if the spot looks different than the other marks on the skin,” says Dr. Marghoob. “Pay attention to any spot or mark that has an uneven texture, shape, border, or distribution of colors. In addition, any spot that has changed in some way should prompt a visit to your local doctor.” 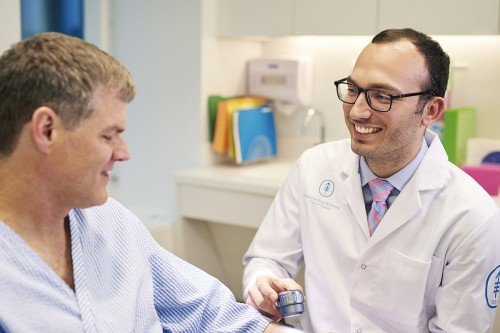 Melanoma Diagnosis
The first step in getting the right treatment is making sure you have the right diagnosis. Learn more about our approach to diagnosing melanoma.
Learn more
Back to top

“Many people have this concept that all melanomas are extremely rapidly growing cancers,” says Dr. Marghoob. “They think that waiting even one day after the diagnosis of melanoma can be fatal.”

While some subtypes of melanoma do grow extremely fast, says Dr. Marghoob, most early melanomas don’t require immediate treatment, allowing ample time to detect, treat, and cure them. Dr. Marghoob advises checking your skin on a monthly basis. “If you notice a changing spot on your skin, don’t delay in getting it checked out by a dermatologist,” he says. And if your doctor does think you may have a melanoma, know that for most people it’s not necessary to rush to treatment. Most people can take the time they need to meet with doctors and understand their options.

5. Melanoma can go away on its own.

Melanoma on the skin can spontaneously regress, or begin to, without any treatment. That’s because the body’s immune system is able launch an assault on the disease that’s strong enough to spur its retreat. Unfortunately, sometimes this happens only after the disease has spread to other parts of the body, such as the liver, lungs, bones, or brain.