A new wave of immunotherapy drugs have been approved for bladder cancer recently. Although these drugs don’t work well for most people, researchers have found that when tumors carry mutations in DNA repair genes, they are more likely to respond. This discovery will help doctors select who should receive these drugs and guide treatments, including combination therapies.

Bladder cancer has entered a new treatment era, with four immunotherapy drugs approved by the Food and Drug Administration within the last two years. Approval of the first drug, atezolizumab (Tencentriq®), came in May 2016, based on results from a clinical trial led by researchers at Memorial Sloan Kettering. Three others followed quickly: pembrolizumab (Keytruda®), nivolumab (Opdivo®), and avelumab (Bavencio®).

All four drugs are checkpoint inhibitors, which target molecules on the surface of immune cells or cancer cells. By binding to the molecules — in this case, PD-1 or PD-L1 — checkpoint inhibitors take the brakes off the immune system and allow it to attack the cancer. These drugs have already revolutionized the treatment of melanoma, lung cancer, and other cancers.

Despite this promise, checkpoint inhibitors work for only a small subset of people, typically around 20 to 30%. But researchers are gaining a better understanding of who is likely to respond to these drugs based on their tumor’s genetic mutations.

MSK medical oncologist Jonathan Rosenberg discusses these genetic factors here. He explains why a recent study he led points toward a specific type of mutation that could hold the key to these drugs’ effectiveness in bladder cancer.

What have we learned about genetic mutations and bladder cancer immunotherapy?

We’ve known for several years that people are more likely to respond to immunotherapy if their tumors have a high mutational burden. That means that the cancer cells contain a large number of mutations. The theory is that a high number of mutations makes the tumors more conspicuous to the immune system. This was first noticed in melanoma and has repeatedly held true for other cancers, including bladder cancer. The limitation with focusing on mutational burden is that it’s a continuum — there is no bright line marking a tumor as having high or low number of mutations. That makes it difficult to know if an individual is likely to benefit from the treatment.

The emergence of these drugs has been a revolution for some people who have highly aggressive, life-threatening bladder cancer.
Jonathan E. Rosenberg medical oncologist
Back to top

How can you use this genetic data to get information that’s useful for treatment?

We just published results in the Journal of Clinical Oncology looking at the connection between DNA repair mutations and response to checkpoint blockade drugs. The study involved 60 MSK patients with urothelial bladder cancer that had spread who had received atezolizumab or nivolumab. All had their tumors analyzed by MSK-IMPACTTM. This test looks for genetic mutations and other changes in hundreds of cancer-related genes, including 34 genes involved in DNA repair. 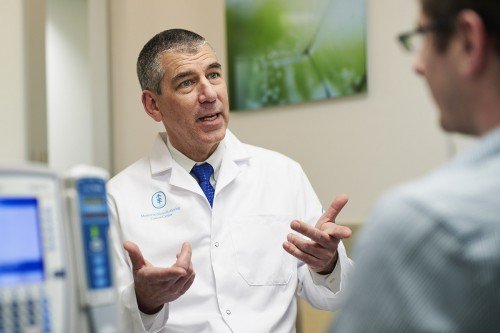 Urologic Care: What Makes MSK Stand Out
Learn why MSK’s outstanding care for prostate, bladder, kidney, and testicular cancers resulted in U.S. News naming it one of the best hospitals for urology.
Learn more

We found that having mutations in these DNA repair genes was associated with a better overall response to treatment. We need to confirm these findings in a larger group of people, but the results suggest that these particular mutations should be studied further as a possible way to find out if a cancer will respond to immunotherapy.

The same DNA repair mutations may also guide decisions on chemotherapy. We have one trial led by [MSK medical oncologist] Gopa Iyer starting later this year that will look at whether people with these DNA repair mutations could avoid surgery and radiation and receive only chemotherapy. These are people who otherwise would definitely need to have their bladder removed, so it would be a major benefit.

What other strategies are being explored to improve the response rate to these immunotherapy drugs?

We are trying a variety of combination approaches in which one of these four FDA-approved drugs is combined with another. One trial tests nivolumab with ipilimumab (Yervoy®), another checkpoint blockade drug that targets a molecule called CTLA-4. We are also testing immunotherapy with drugs called angiogenesis inhibitors. These affect the tumor’s blood supply and the immune microenvironment within the tumor. Another approach combines immunotherapy with PARP inhibitors, which actually target the DNA repair process. That could have added benefits in people whose tumors have DNA-repair mutations.

The emergence of these drugs has been a revolution for some people who have highly aggressive, life-threatening bladder cancer. Immunotherapy has changed the trajectory of their lives. But it still doesn’t work for most people. We have to find ways to combine these potent drugs with other therapies to improve response rates and survival. And of course, we have to keep identifying new treatments that will work when the immune system is not able to tackle the cancer.

Why Do Immune Checkpoint Inhibitors Work for Only Some People with Cancer?
Bladder Cancer
Jonathan E. Rosenberg
Gopa Iyer