In February, Harold Varmus’ memoir about his life in science was published. 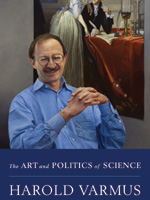 In February, W. W. Norton & Company published Memorial Sloan Kettering Cancer Center President Harold Varmus’ memoir about his life in science. The Art and Politics of Science considers not only the research that won him a Nobel Prize but also his tenure as Director of the National Institutes of Health and as President of Memorial Sloan Kettering.

Based on three lectures Dr. Varmus delivered in 2004, the book chronicles his path from a graduate student in English literature, to his discovery that he was drawn to medicine and science, and his work at the forefront of cancer research at the University of California, San Francisco. Dr. Varmus also shares his perspective of the politics of stem-cell research, global health, budget battles, science publishing, and the central role of science in our world.

“I hope to provide a picture of one person’s odyssey through unusual times in science,” writes Dr. Varmus in the book’s introduction, “a sense of what it means to carry out scientific work with interesting colleagues, and an account of some of the social and political factors that affect how science is done and what we as a society can do to foster its potential.”

Stay Informed.
Get the latest news and updates on MSK’s cancer care and research breakthroughs sent straight to your inbox with our e-newsletters.
Newsletter Sign Up