Using drama can help people make sense of their emotions in an engaging way. Jenny Solomon shares how theater arts can be a creative outlet for people affected by cancer.

Inside the pediatrics inpatient unit at Memorial Sloan Kettering, Gloria Habib had turned into a turtle.

Not literally, of course. Gloria was playing make-believe with Jenny Solomon, who has been practicing acting with children and adults at Memorial Sloan Kettering since 2002. Her work is one of many weekly experiences offered in pediatrics and through the Teen and Young Adult Program.

Ms. Solomon was helping 8-year-old Gloria tap into her emotions and her creativity by improvising a story they had created together. Gloria was a turtle on a hot-air balloon steered by Ms. Solomon.

After landing back on solid ground, the two burst into a fit of giggles. Ms. Solomon clapped, and Gloria took a bow. Shortly after, a nurse came in to refill medicine in Gloria’s IV drip. It barely fazed the young girl.

It’s all in a day’s work for Ms. Solomon, a social worker and former actor who uses theater and drama therapy to help people cope with trauma. After her husband, Michael, founded Musicians on Call, an organization that sends musicians to perform for people receiving care at health facilities, Ms. Solomon decided she wanted to use her talents in a similar way.

She visits patients and caregivers at the bedside and in group settings. Her work is an imaginative blend of improvisational and psychological concepts.

“It’s about giving people a chance to create change and expand their own role repertoire,” Ms. Solomon says. “When someone is terrified or feeling hopeless, giving them a chance to play a character who feels really brave and really strong integrates into the body, where new neural pathways are formed.”

In other words, the situations may be imaginary but the benefits are anything but. Research into drama therapy shows that it can reduce feelings of aggression and hostility. It allows for emotions that people with cancer or their loved ones may be hesitant to explore — fear, anger, and sadness, to name a few. When those sensations bubble to the surface, people can process them more effectively, maybe even for the first time.

“Once we express a feeling, then we’ve got freedom to have other feelings because we’re not weighed down by that one,” she says. 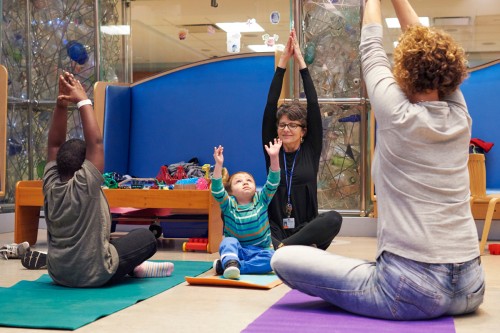 Recreation
Through our group and individual activities, we encourage kids, teens, and young adults to develop new interests by focusing on the power of their bodies, the strength of their imaginations, and the importance of laughter.
Learn more
Back to top

It isn’t just acting that takes place during these sessions. Sometimes Ms. Solomon will write a poem or a short story with someone she’s visiting. Other times, people want to have a conversation. Regardless of the activity, trust is at the heart of every interaction.

Unlike many other people coming into a person’s hospital room — doctors, nurses, technicians, and more — Ms. Solomon is the rare visitor who encourages people to tell her if they aren’t up for a visit. Doing so empowers them in a world where so much is out of their control, she says.

Like any career, Ms. Solomon’s comes with intense challenges. She recalls one young girl who crafted a poem with Ms. Solomon that her mother then used during her memorial service.

“She said it captured the essence of who she was and what she believed in,” Ms. Solomon says.

But her days are also colored with profound joy.

“I feel so, so grateful, and I also feel embarrassed, like I should not be paid to do this,” she says. “I feel very lucky.”

About Our Care
Our Child Life Services