MSK cancer immunologist Alan Houghton shared his experience with illness in a pre-recorded video, followed by a panel discussion with his family, colleagues, and friends.

The first worrisome sign occurred on a walk home from a friend’s funeral: a limp foot that no longer took instruction from its owner.

That initial sign led to others, and then to a trip to the neurologist, who made the diagnosis of amyotrophic lateral sclerosis, a progressive neurodegenerative disorder commonly known as Lou Gehrig’s disease.

“I like to call it Stephen Hawking’s disease,” said Alan Houghton, former Chief of the Clinical Immunology Service at Memorial Sloan Kettering, who was diagnosed with the condition in 1993.

“I’ve always felt the patient-doctor distinction is extremely artificial and overused in medicine,” Dr. Houghton said, adding that he thought empathy was the most important quality a physician could have.

Though even at the time, he couldn’t move and was bound to a wheelchair, he said he had much to be grateful for: “I can think. I’ve got a great family. I’ve got a great job. I love research and I love teaching.”

Following the 25-minute video, Dr. Houghton’s family and colleagues offered their reflections on his influence as a father, husband, teacher, and friend. Participating in the panel were his wife, Meryl, his two sons, Colin and Sean, and colleagues Jedd Wolchok and Paul Chapman.

“Alan often said that physicians hide behind the white coat,” Dr. Wolchok recalled. “That’s something I think about all the time when I’m with a patient. We’re just two people in a room, one of them needing the help of the other.”

Dr. Wolchok first met Dr. Houghton in 1984 as a summer student who came to work in his lab. An early advocate for the field of immunotherapy, Dr. Houghton served as a mentor to several leading practitioners, including Dr. Wolchok, who is now Chief of the Melanoma Service at MSK. 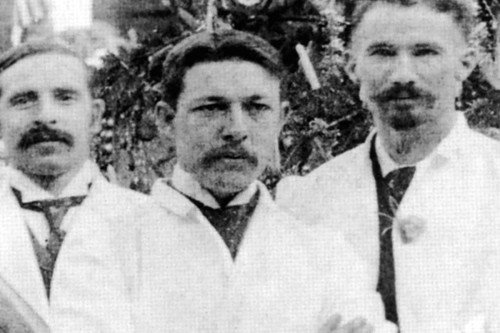 MSK Immunotherapy — Timeline of Progress
View our timeline of progress to see how MSK scientists have been at the forefront of immunotherapy research for more than 120 years.
Learn More

“He liked to learn something new every day,” said Sean Houghton.

Colin Houghton said, “it just felt like life to me. He’s not able to move, but he has so many other qualities. In some ways, it freed him up to spend more time with me.”

The title of the program was “Reflections on Illness,” although his family has a unique perspective. “We don’t look at him as ill,” Meryl, his wife of 41 and a half years, said. “We’re not physicians, so we just look at him as having a disability. When he runs a fever, he’s ill. But otherwise he’s just continuing with his life.”

During the video, Dr. Gilewski asked Dr. Houghton if he believed in an afterlife. “No, not really,” he said. But he said he did think about the impact he’d had on others, and how that may add up to something lasting.

“As they say in chaos theory, a butterfly beating its wing in Beijing can affect the weather in New York,” he said. “These things can have a big effect.”

Stay Informed
Get the latest news and updates on MSK’s cancer care and research breakthroughs sent straight to your inbox with our e-newsletters.
Newsletter Sign Up