The first thing to do if you notice a lump in your breast? Don’t panic.

“Many lumps turn out to be benign,” says Memorial Sloan Kettering Cancer Center breast radiologist Sandra Brennan, the Director of Radiology at MSK Westchester. “But the most important thing is to not ignore it. Get it checked out.”

The earlier breast cancer is caught, the easier it is to treat.

Lumps that are benign (not cancer) may be tender and feel smooth and mobile. A cancerous lump is more likely to feel hard, but some non-cancerous lumps can feel hard, too.

Dr. Brennan recommends seeing a doctor about any new breast lump — also called a breast nodule — no matter how big or small it is. That’s true even in someone who recently had a negative mammogram. But, she adds, keep in mind that the lump could very well be one of the following:

Cysts are fluid-filled sacs that usually don’t require treatment but can be drained if they are large and cause discomfort. Sometimes they are sensitive to the touch; other times they are barely noticeable. They tend to wax and wane with a woman’s menstrual period and may go away on their own.

“A cancerous lump will not change with your menstrual cycle,” Dr. Brennan says.

Cysts are quite common in young women. In women under 30, doctors often use ultrasound to evaluate lumps — a mammogram usually isn’t warranted. Cysts in the breast can run in families. Many women will say their mother or sister also have cystic breasts.

Fibroadenomas are clumps of benign breast tissue that come together and form a mass. Unlike cysts, these breast nodules usually feel firm but are usually moveable. They are common and usually found in women younger than 50. Some present as lumps, while many are found incidentally on breast imaging such as mammography or ultrasound. As with cysts, fibroadenomas usually don’t require any treatment.

“You can draw a smooth line around the edges of a fibroadenoma, which is typically oval-shaped and oriented parallel to the chest wall,” says Dr. Brennan. “With cancer, the margins are more irregular and the mass is often vertical with shadowing and increased blood flow. Cancers typically have increased blood supply.”

PASH is a benign mass caused by an overgrowth of benign cells found in connective tissue and smooth muscle. It is influenced by hormones and in rare cases may cause breast enlargement. It can feel like a lump, but most of the time a person doesn’t even feel it; it just shows up on routine imaging or is found incidentally on a breast biopsy. It is most often found in younger women between the ages of 30 and 50. However, cases in girls as young as 14 have been documented. Even though it has a long, scary name it is harmless and usually does not require treatment, unless large and causing discomfort.

Sometimes what feels like a lump is just dense breast tissue or a ridge of breast tissue. Regular breast self-exams can help women familiarize themselves with their breasts, Dr. Brennan says. Menstruating patients should examine themselves about seven days after starting their period every month.

Fat necrosis develops when an area of fatty breast tissue gets injured, whether through breast surgery or trauma, like a car accident or bad fall. It can feel like a firm lump. “We commonly see it after surgery in patients who have had lumpectomies, breast reduction surgery, or mastectomies,” Dr. Brennan says.

A Reaction to the COVID-19 Vaccine

Dr. Brennan says she sees people who have thickened lymph nodes in the armpit of the arm where they received the vaccine. It happens most often when a person’s breast screening is close to when they were vaccinated. “We will do an ultrasound to check it,” Dr. Brennan says, “and we can usually tell that it’s a benign lymph node.” Sometimes a follow up ultrasound of the lymph node is performed 8 to 12 weeks after the initial scan. A benign reactive lymph node will typically return to normal size within that time.

However, Dr. Brennan notes, people should not assume a lump under the armpit is from the vaccine, so it’s still important to get it checked out. It is also extremely important to not skip your routine screening or delay it too long on account of the vaccine. Simply inform the technologist performing your mammogram when you received the vaccine and which arm. 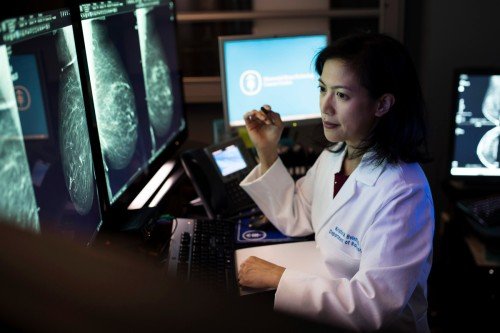 A physical exam alone cannot reliably distinguish a benign lump in the breast from a suspicious one. Thankfully, there are many options for screening:

Key Takeaways
Back to top
Navigate this article