The history of MSK as a cancer hospital is inseparable from the history of radium, one of the earliest cancer treatments.

In the mountainous region of what is now the Czech Republic, along the German border, is a mining town called Joachimsthal, famous for its silver ores. During the 16th century, Joachimsthal mines supplied Europe with the silver to make coins, called “Joachimsthaler,” or simply “Thaler” — which is today where we get the word “dollar.”

Occasionally, miners digging for silver would hit a snag: a vein of precious metal would give way to a blackish ore they dubbed pitchblende, or “bad luck rock,” since it usually meant the end of silver in that vein.

When placed on or near a tumor, radium would cause the mass to shrink, sometimes completely. Radium’s use in cancer treatment was limited only by its extreme rarity. A ton of pitchblende contains only a few micrograms of the element.

By 1926, Memorial Sloan Kettering had more radium than anywhere else in the world — about 9 grams — earning it the nickname “Radium Hospital.” How it came to possess so much of this precious substance, and what this meant for the history of cancer treatment, is a little-known story that involves a father on a cancer mission, uranium mines in Colorado, and a scientist who trained with Marie Curie.

Radium is a naturally occurring radioactive element, number 88 on the periodic table. It emits particles from its nucleus as it decays into other, lighter elements, and is itself the byproduct of the decay of the heavier element uranium into lead.

By 1926, Memorial Sloan Kettering had more radium than anywhere else in the world — about 9 grams — earning it the nickname “Radium Hospital.”

Polish physicist Marie Curie and her husband, Pierre, discovered radium in 1898, refining it from pitchblende scooped from the Joachimsthal mines. Marie Curie was inspired to look for radiation by the discovery, made just two years earlier by Henri Becquerel, that uranium ore could fog a photographic plate. To her, this suggested that uranium atoms were releasing invisible rays — what she called radioactivity.

The discovery of radioactivity launched a new era of scientific inquiry into the structure of the atom. Scientists increasingly understood that atoms were not the smallest solid particle of matter, but could be broken up into subatomic particles. Some of these particles, when released, provided a jolt to tissues in their path, causing burns. It was not long before scientists were using the invisible rays of radium to treat cancer.

A Gift with Strings Attached

Among the earliest enthusiasts for radium therapy was James Douglas, a scientist and mining engineer whose daughter, Naomi, was diagnosed with breast cancer in 1907. Doctors in New York operated on her five separate times but each time the cancer returned. As a last-ditch attempt at a cure, Dr. Douglas brought his daughter to Europe to be treated with radium. After her death in 1910, Dr. Douglas devoted his life to promoting radium therapy for cancer treatment.

Radium was incredibly scarce in the early years of the twentieth century, especially in the United States, since Austria (which controlled the Joachimsthal mines) had a carefully guarded monopoly on the substance. In 1913, with help from the US government, Dr. Douglas formed the National Radium Institute, to mine radium from uranium ores recently discovered in Colorado.

In a few short years, thanks to Dr. Douglas’s efforts, the amount of radium available in the US more than quintupled. In 1917, he gave his entire share — worth about $300,000 at the time — to Memorial Hospital.

This gift came with “strings attached,” Memorial Hospital’s historian Bob Considine tells us — in the form of specific terms of use articulated in legal documents known as the Douglas deeds. The first stipulation was that the hospital should return to its original mandate of serving as a cancer hospital (rather than a “general” hospital for the treatment of many diseases, as it had become). The second was that radiation would be studied and used to treat cancer.

The radium sources at Memorial Hospital were first used in the treatment of skin, prostate, and gynecologic cancers. Treatments were administered in two main ways. One involved packing a radium source in a lead box with a hole in it; the box would be placed above the body with the hole positioned over the tumor. This was the first use of external beam therapy, so-called teletherapy.

The second approach entailed collecting radium “emanations” (what we now call radon gas) in glass tubes, which could then be implanted directly into the body. This was one of the earliest forms of brachytherapy, or internal radiation therapy. 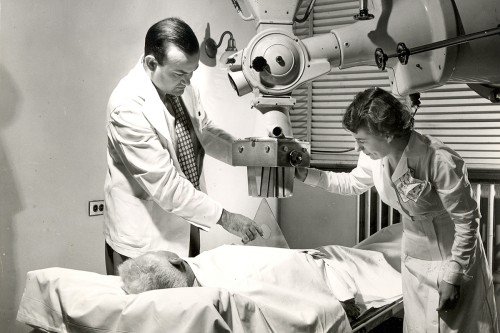 MSK Radiation Therapy: Timeline of Progress
Memorial Sloan Kettering was one of the first medical institutions to recognize the potential of radiation for cancer treatment.
Learn More

Physicist Gioacchino Failla, who received his PhD with Marie Curie in Paris, pioneered many innovations in radiation therapy at Memorial in the early years of the twentieth century. He developed a semi-automatic radon collection system for the radon plant, which was housed in the basement of the hospital. Dr. Curie made a special trip to see Dr. Failla’s handiwork when she toured the US in 1921.

Dr. Failla also pioneered the use of gold rather than glass tubing to capture the radon gas. Gold had the advantage of filtering out the beta rays that can cause skin burns and inflammation, while still allowing the more powerful gamma rays to pass through. The gold tubing could then be cut into small “seeds,” which were implantable in the body. Seed implantation is still a mainstay of cancer brachytherapy today.

Seed implantation is still a mainstay of cancer brachytherapy today.

Dr. Failla also had the foresight to hire a talented young physicist named Edith Quimby as his assistant. Dr. Quimby would go on to develop standard dosing tables for radiation treatment and also developed the radiation film badge as a safety protection against accidental exposure.

We now know that radiation works by damaging DNA in cells. Cancer cells are less able to repair this DNA damage than normal cells and die preferentially as a result. Before its mechanism of action was understood, those who handled radium did not know to take appropriate safety precautions and suffered serious consequences as a result.

Marie Curie died in 1934 of aplastic anemia, a blood disease likely caused by chronic, low-level radiation exposure. James Douglas — who believed radium could cure many ailments and kept a pitcher of radium water on his desk — died in 1918 of a similar disorder.

The most famous cautionary tale was the case of the radium dial painters. Between 1917 and 1926, the US Radium Corporation in Orange, New Jersey, produced watches with luminescent dials coated with glow-in-the-dark paint incorporating radium. Dial painters — most of them women — would “point” the bristles of their brushes between their lips before applying paint to the dial. Over the course of months and years, the women became sick, some developing disfiguring bone cancers. (The radium in the paint behaved like calcium and accumulated in bones.)

Several of the dial painters brought a lawsuit against the US Radium Corporation, arguing that the company had knowingly endangered workers’ health by not instructing them in safety precautions when handling radioactive material. The lawsuit generated lots of publicity and the plight of the “radium girls” became a national sensation. MSK scientists James Ewing and Lloyd Craver — who were world experts in radiation science — served on the medical board that evaluated the claims.

Soon after, radium was banned from use in commercial products.

End of an Era

Radium is no longer used for cancer treatment. After World War II, it became possible to create man-made radioactive elements (radioisotopes) in nuclear reactors, instead of isolating radium from uranium ore. These new isotopes — cobalt-60, cesium-137, and iodine-125, for example — were much safer to handle and administer than radium or radon seeds.

MSK’s radon plant was eventually disassembled in 1971. A few years later, the radium from the plant was sent to a disposal site, accompanied by a cavalcade of police cars and representatives from the NYC Department of Health.

The site of the original radon plant, on Central Park West and 106th Street, is now an apartment complex.

To learn more about the history of radiation therapy at MSK, see our timeline.