Liquid biopsy, which analyzes a patient’s blood sample for tumor cells or tumor DNA, is a noninvasive alternative to conventional biopsy. A new version of this test examines the appearance and genetic makeup of tumor cells and could guide treatment decisions for certain prostate cancer patients.

Liquid biopsy, a new alternative to tissue biopsy, analyzes a patient’s blood for tumor cells or tumor DNA. It holds the tantalizing promise of a less invasive, more comprehensive way to deliver more-targeted therapy and to monitor response.

Now a new study shows that liquid biopsy could help guide decisions on the most appropriate treatments for patients with prostate cancer.

We spoke with Dr. Scher about the potential of this novel approach and the prostate cancer study.

What were you trying to find in the study using this type of liquid biopsy?

We wanted to learn how many different types of cancer are in the individual prostate cancer patient. We analyzed circulating tumor cells (CTCs), malignant cells shed into the bloodstream by solid tumors. In patients with advanced disease, CTCs are released both from the site of the original tumor as well as from areas where the cancer has spread, or metastasized. Because of this, CTCs are good indicators of tumor heterogeneity — the diversity of the cancer cells both within the primary tumor and within different metastatic sites.

Earlier research told us that individual patients can have a range of different types of CTCs. We looked at multiple individual CTCs in a patient to find out how many different variations existed. The new liquid biopsy test uses cutting-edge technology to scan the entire landscape of CTCs that are spread out on a glass slide and analyze both their appearance and, separately, their genetic makeup. This gives us a sense of how heterogeneous, or diverse, the cell populations are.

Why is the level of cancer cell heterogeneity important?

Tumor cell heterogeneity can make cancers more difficult to treat. Newer therapies such as abiraterone or enzalutamide, which target androgen receptor signaling and the androgen receptor itself, can effectively shrink and control the additional spread of prostate cancer in many men. They work by blocking the effects of the hormone testosterone — an androgen — which stimulates the growth of prostate cancer cells. But not all men respond equally well to these drugs, and some don’t respond at all. In addition, the drugs often stop working as the cancer evolves and develops resistance.

Using a liquid biopsy can give you cells that are representative of multiple metastatic sites, so you have a better chance of understanding why a treatment may not be working, This contrasts with a single site biopsy, which may or may not be representative of the disease as a whole. In addition, being able to measure heterogeneity might help predict how well a patient will respond to a particular therapy.

What was the main finding of the study?

We looked at 221 blood specimens that had been drawn from 179 patients with metastatic prostate cancer who were about to begin treatment with either abiraterone or enzalutamide or a type of chemotherapy drug called a taxane.

Knowing the level of heterogeneity of a patient's prostate cancer could be used to help select the [best] treatment.
Howard I. Scher medical oncologist

This study found that patients with more diverse — or heterogeneous — cell populations did not respond as well or live as long after treatment with a hormone drug relative to patients whose CTCs were more homogenous.

This makes sense because the hormonal agents are more targeted, and a diverse population of cells may contain many cancer cells lacking that target. In contrast, the level of heterogeneity did not appear to affect response to chemotherapy.

How does the blood test determine the level of heterogeneity?

The test, which was developed by Epic Sciences, involves placing a blood specimen onto a glass slide and staining it to distinguish normal blood cells from CTCs. A machine then scans the slide to analyze various features of the CTCs, including size and shape. It works like facial recognition software used at airport security. The software can quickly identify a CTC by examining these features.

Researchers can then select individual cells of interest, pick them up from the slide, and check for genetic abnormalities. By looking at variation in CTC appearance and an individual’s genetic makeup, we can assign a heterogeneity score to that patient.

The study showed that a high heterogeneity score correlated with poorer response to the hormone therapy.

How could this technology change the treatment of prostate cancer?

Knowing the level of heterogeneity of a patient’s prostate cancer could be used to help select the treatment to which a patient is more likely to respond. For example, if a patient has a high level of heterogeneity in their CTCs, the clinician would choose chemotherapy rather than hormonal therapies — sparing the patient side effects or problems that may result from a treatment likely to be ineffective. This would provide a clear clinical benefit.

Also, unlike a tissue biopsy, blood samples are noninvasive and easily obtained at any time, so treatment adjustments could be made sooner. 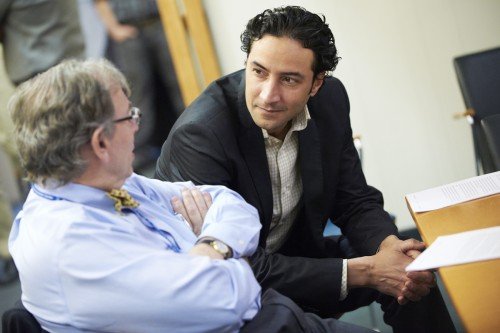 This is really groundbreaking technology. CTCs are very small in number compared with other cells in the bloodstream — approximately one cell in a billion — so being able to isolate them reliably and analyze them quickly is an important advance.

Before we can make this particular liquid biopsy part of routine practice, we first need to validate it in a clinical trial, which we are now designing to conduct through the Prostate Cancer Clinical Trials Consortium. This will give us definitive answers about how well it predicts patient outcomes. But this type of test was not even conceivable just a few years ago — the technology is evolving so quickly it’s incredible.