At a time when too many women delayed their yearly mammogram because of the pandemic, Katie Gay is very glad she did not miss hers.

She knew that because of her dense breasts, regular screenings were critical. After her routine mammogram in February 2021, Katie found out she had HER2-positive breast cancer, an aggressive form of the disease.

“This mammogram very well could have saved my life,” says Katie, a 49-year-old married mother of two children and real estate agent in New Jersey.

Many Americans have been wary of visiting their doctor’s office during the COVID-19 pandemic and more than one-third skipped routine cancer screenings over the last 18 months. According to the Journal of the National Cancer Institute, mammograms dropped as much as about 80% at certain times of the pandemic. As a result, experts project 2,487 additional deaths from breast cancer by 2030.

The projections are especially troubling because “many breast cancers do not present with symptoms — no masses, no pain, no skin changes,” says Serena Wong, who is Katie’s medical oncologist at Memorial Sloan Kettering Cancer Center.

“We know that mammograms save lives,” Dr. Wong adds. “The earlier we can detect and treat a breast cancer, the more likely our treatments are to be effective and the higher the likelihood of cure.”

Senator Amy Klobuchar (D-MN) put a spotlight on this issue when she revealed that she was treated for stage 1A breast cancer at the Mayo Clinic after a routine mammogram in February 2021.

“I hope my experience is a reminder for everyone of the value of routine health checkups, exams, and follow-through,” she wrote in a Medium post.

Disadvantaged Suffer the Most Dramatic Drop

Many parts of the United States saw a significant drop in breast cancer screening of older low-income women during the COVID-19 pandemic, according to findings published in the journal Cancer. The Centers for Disease Control and Prevention (CDC) reported that breast cancer screenings dropped 87% in April 2020, based on data from its National Breast and Cervical Cancer Early Detection Program, which screens low-income and uninsured women. In terms of race and ethnicity, American Indian/Alaskan Native women showed the biggest drop in screenings, a staggering 98%. The data were published in journal Preventive Medicine.

MSK continued its breast cancer outreach to these communities during the pandemic. For example, eligible people who came to MSK’s COVID-19 vaccination clinic at the Abyssinian Baptist Church in Harlem were encouraged to sign up for a mammogram at MSK’s Ralph Lauren Center.

“It was so important for us to keep cancer screening and prevention at the forefront of the community’s mind during the height of the pandemic because we saw the need for it every day,” says Yadira Rosemin, associate director of operations for the Ralph Lauren Center. “Black and Latinx patients have higher rates of later diagnosis than their white counterparts. We aim to reduce that disparity by providing screening services regardless of insurance status.”

In addition, MSK’s Immigrant Breast Health Access Program has been organizing mobile screenings, culturally appropriate education, and screening referrals to Arab and Mexican women across the five boroughs throughout the pandemic. Breast health workshops in English, Arabic, and Spanish are offered virtually. Members from MSK’s Immigrant Health & Cancer Disparities Service also call patients each month to remind them to get their mammogram and help if needed. 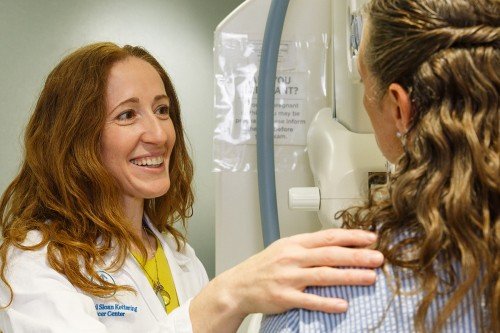 Mammograms & Other Types of Breast Exams
Learn about the different types of breast exams that can help detect breast cancer at its earliest stages, before symptoms develop.
Learn more
Back to top

“This Could Have Been So Much Worse”

Katie feels fortunate that she was able to keep up with her mammogram at MSK, knowing COVID-19 safety protocols were in place.  After her diagnosis, she underwent a lumpectomy with breast surgeon Laurie Kirstein in June 2021. Then, she was eligible for a clinical trial in which the typical sequence of standard chemotherapies was reversed. Katie responded so well to the initial combination that she did not need the second. She had radiation therapy and finished all of her treatment after seven months. She was able to continue working throughout her experience.

“If I had waited six months or a year, I don’t know if the outcome would have been the same, and that’s really scary to think about,” she says. “This could have been so much worse.”

“This wasn’t ‘I feel something weird’ — this was just my regular mammogram,” she says. “I tell everyone, ‘Don’t put it off.’”

Cancer Is Not Going Away During COVID-19: Physician-in-Chief Lisa DeAngelis Shares Why Patients Need to Get Back to the Clinic
Breast Cancer
Serena Wong
Laurie J. Kirstein
Mammograms & Other Types of Breast Exams