Immunotherapy has emerged as a promising new treatment option for people with lung cancer. MSK scientists are conducting research to enable more patients to benefit from immunotherapies, at earlier stages. We spoke with MSK lung cancer and immunotherapy expert Matthew Hellmann to learn more.

For people with lung cancer, immunotherapy has emerged as an important new treatment option. Drugs called immune checkpoint inhibitors that “release the brakes” on the immune system have produced remarkable results in some patients, offering hope to the more than 200,000 people in the United States who are diagnosed with lung cancer every year.

Yet currently only a small group of patients respond to these drugs. Researchers believe that combining immunotherapy drugs may be one way to boost the number of responders. They would also like to give immunotherapy earlier in the course of the disease, including to patients with early-stage cancers and as first-line treatment for metastatic cancer. (Currently, immunotherapy drugs are approved for non–small cell lung cancer only as second-line treatment, after chemotherapy.) 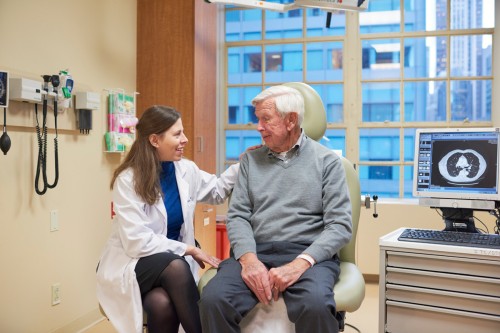 Lung Cancer Clinical Trials & Research
Patients can access new lung cancer treatments that might not be available elsewhere through our program of clinical trials.
Learn more

This week at the annual meeting of the American Society of Clinical Oncology (ASCO), Memorial Sloan Kettering’s Matthew Hellmann will present results from a phase I study of two immunotherapy drugs, nivolumab and ipilimumab, given in combination to patients with previously untreated advanced non­–small cell lung cancer. Nivolumab is a checkpoint inhibitor that targets an immune protein called PD-1, while ipilimumab targets one called CTLA-4.

We sat down with Dr. Hellmann to discuss how immunotherapy is changing the care of patients with this disease.

How would you describe the progress we’re making in immunotherapy for lung cancer?

What I think is remarkable is that, just a few years ago, nobody thought immunotherapy was relevant in lung cancer. Since 2012, there’s been this remarkable expansion of trials and data for PD-1 inhibitors. The result is that we now have a totally new class of drugs for the most common and deadliest type of cancer in the world.

Although the change in the field has been profound, not everyone benefits from these therapies. Only 15 to 20 percent of patients with lung cancer benefit from PD-1 blockade by itself. And so it prompts two major questions: How do we identify more precisely the people who should get PD-1 therapy? And then also how do we develop new immunotherapy combinations so that we can help more people?

At ASCO, you’ll be presenting updated data from a clinical trial that combined a PD-1 inhibitor with another immunotherapy drug. How do the data look?

I think the data are really compelling. I hope the message that comes out of ASCO, both from this report and others, is that the initial successes of PD-1 inhibitors by themselves for patients with lung cancer are just the beginning. There is real promise in combination immunotherapy and I expect there will be opportunities for new molecules and new combinations to let more patients benefit from immunotherapy in the future.

The patients in this study had no prior treatment, including chemotherapy. Are we looking at the end of chemotherapy for lung cancer?

I worry about the narrative “chemo is terrible.” I think that’s the wrong way to look at it. Immunotherapy is a really important, transformative addition to the options we have to help people with lung cancer. But sometimes it doesn’t work, and sometimes chemotherapy is the right thing for patients. The point is that you want a treatment that works, whatever it is. The more options we have and the more diversity of types of treatment we can use, the better off we all are.

How will doctors determine which treatment is best to give in the first-line setting?

Several important clinical trials are ongoing now looking more closely at combination immunotherapies. In one phase II trial, everyone is getting the combination of ipilimumab plus nivolumab. A large phase III trial is comparing chemotherapy versus nivolumab by itself versus ipilimumab plus nivolumab. That trial is aimed at answering the question of what’s the best first thing to give somebody with lung cancer? Tissue samples are being collected, and the hope is that we will be able to understand how treatment responses relate to the underlying tumor biology. Eventually, the goal is to use characteristics of the tumor to choose the right therapy for the right patient.

In lung cancer, are you seeing long-term responders to immunotherapy like we’ve seen in melanoma?

The longest cases we have are just over five years, from the phase I study of nivolumab that began in March 2011. There were two patients in that study who received treatment for two years who responded. They have been off treatment now for three years and are still doing well.

Only time will tell how long these responses can last, but we hope they are permanent. There are a handful of patients who, in a very literal way, have had their lives given back to them. That’s pretty cool.

What role do you see for immunotherapy as a treatment for lung cancer going forward?

The opportunity to cure someone with metastatic lung cancer has not previously been possible, so the fact that we now have some patients who have had a complete pathologic response at least gives you that nugget of hope. I think that what is transcendent about immunotherapy is the possibility of durability — something that generally isn’t seen with chemo or targeted therapies. Yet I also think it’s important that we remain vigilant about the possibility that these responses may not last forever and that we still have lots of work to do in order to increase the number of people we can help.

The phase I clinical trial of nivolumab and ipilimumab (CheckMate012) is being supported by Bristol-Myers Squibb, the maker of these drugs.