One of the most exciting advances in cancer treatment over the past few years has been the development of the drug sotorasib (LumakrasTM) for treating people with advanced non-small cell lung cancer. Sotorasib is a targeted therapy that stops the growth of tumors caused by a mutant version of the protein KRAS (pronounced “kay-rass”). It was approved by the US Food and Drug Administration in May 2021.

In a study published October 8, 2021, in Science, researchers from Memorial Sloan Kettering Cancer Center took a closer look at what KRAS proteins do in normal cells and how certain mutations change them in a way that makes them essential for cancer growth.

“The KRAS protein serves as a molecular switch that turns on and off many important cellular functions,” says senior author Piro Lito, a physician-scientist and member of MSK’s Human Oncology and Pathogenesis Program. “Because of this ability, it has been referred to as the ‘beating heart’ of cancer.”

This research has important implications for understanding how KRAS mutations drive the growth of cancer cells. It also could lead to the development of additional cancer drugs that could be even more effective at targeting KRAS mutations than sotorasib and other current drugs.

[KRAS] has been referred to as the 'beating heart' of cancer.
Piro Lito physician-scientist

The KRAS gene, initially discovered in 1982, was one of the first cancer genes ever identified. Yet despite that early discovery, progress to develop treatments has been slow. Scientists labeled the KRAS protein “undruggable” because its smooth, round shape made it difficult to develop drugs that could latch onto it and block its activities.

A study published in 2016 by Dr. Lito and colleagues reported that drugs that target a mutant version of KRAS known as KRAS-G12C can sneak in and lock the mutant in its inactive state, which prevents it from wreaking havoc. When KRAS-G12C is active, the drugs cannot bind. (KRAS-G12C accounts for about half of all KRAS mutations in lung cancer.)

Now, members of Dr. Lito’s team have taken a closer look at what the KRAS protein does in its active state — and how exactly it drives cancer. Much of this work was carried out by Chuanchuan Li, a postdoctoral researcher in Dr. Lito’s lab.

KRAS breaks down the molecule GTP into another one called GDP. KRAS is active when bound to GTP and inactive when bound to GDP. In normal cells, “helper” proteins called GAPs enhance KRAS’s ability to break down GTP. This results in the inactivation of KRAS and ensures that cell growth is kept in check. Cancer-associated KRAS mutations were thought to prevent the helper GAP proteins from inactivating KRAS, leading to unrestrained growth. However, the mode by which the new KRAS-G12C inhibitors work exposed limitations in this understanding. 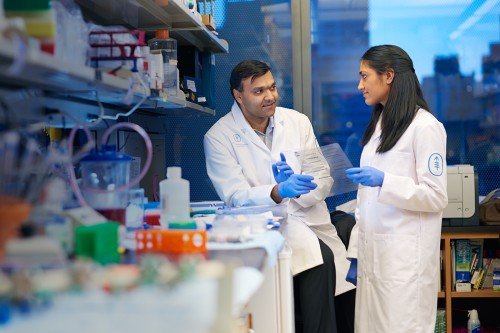 In the new study, the researchers set out to determine whether cancer cells contain helper proteins that enable mutant KRAS to break down GTP into GDP. “We suspected that mutant KRAS-specific GAPs would be present in cancer cells, because otherwise KRAS-G12C inhibitors would not be effective,” Dr. Li says. The experiments led to the identification of a GAP protein named RGS3. Further studies revealed that RGS3 helps to inactivate mutant KRAS by enhancing its ability to break down GTP. The presence of RGS3 may also make mutant KRAS more responsive to sotorasib or similar drugs.

“This discovery helps reshape our understanding of how mutations activate KRAS and reveals new opportunities for therapeutic interventions,” Dr. Lito says, adding that it’s likely that cancer cells express other helper proteins that work in a similar manner to RGS3.

Prior to this study, mutant KRAS proteins were thought to be in an “always active” state. The investigators say the susceptibility to helper GAPs such as RGS3 may be an “Achilles’ heel” that could enable them to come up with additional KRAS-directed therapies.

Dr. Lito reports research grants from Mirati, Revolution Medicines, and Strategia. He is an inventor on patents filed by MSK regarding treatment of KRAS- or BRAF-mutant cancers and has received scientific advisory fees from Revolution Medicines and Black Diamond Therapeutics.