The body is presented with stressors throughout life. These stressors include genetic and environmental challenges that accumulate over time and damage cells, circuits, and organs. This can lead to a wide variety of maladies, including cancer and age-related brain disorders.

Sloan Kettering Institute scientist Gabriela Chiosis and her colleagues study the effects of stressors on proteins and the networks they make up in cells. In a new study published in Nature Communications, her team discovered how stress rewires key connections in the brain. These changes lead to malfunctions associated with Alzheimer’s disease. In addition, they demonstrated how a drug that’s currently being tested in clinical trials for Alzheimer’s, called PU-AD, may correct faulty wiring and preserve brain functions. In lab mice, the drug rewired circuitry within the hippocampus, the part of the brain associated with memory. The result was improved memory without any side effects.

“This study is the culmination of years of research in my lab,” Dr. Chiosis says. “It’s a paradigm-shifting way to think about Alzheimer’s.”

[This study is] a paradigm-shifting way to think about Alzheimer's.
Gabriela Chiosis scientist

In 2016, Dr. Chiosis led a study showing that in cancer cells, proteins called chaperones band together in response to stressors associated with cancer and form faulty networks. She named this faulty network of chaperones the epichaperome.

As their name implies, chaperone proteins take care of our cells. They help proteins get made and ensure that cellular activities are coordinated properly. The epichaperome, on the other hand, changes how proteins interact with one another. It causes them to improperly organize inside cells and accelerates the course of disease.

Looking for Epichaperomes in Alzheimer’s Disease

Alzheimer’s is a progressive neurodegenerative disease with complex causes. Many stressors can contribute to it, including diabetes, stroke, high blood pressure, and traumatic brain injury. Genetic risk factors and other age-related changes can also damage brain circuitry over decades. “We decided to look at whether this complex matrix of stressors that change the brain is related to epichaperome formation,” Dr. Chiosis says.

This turned out to be the case. Her team found that in the Alzheimer’s brain tissue, epichaperomes assisted the incorrect organization of many proteins required for normal brain function, including memory and higher-order executive function. Faulty disorganization of memory-related proteins seemed to cascade into defective communication between neurons. That disruption ultimately led to brain dysfunction. 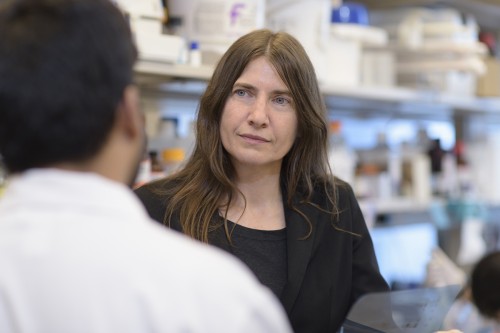 “These changes were similar to network failures seen in electrical or mechanical components that eventually lead to system failure and shutdown,” explains Dr. Chiosis, a member of SKI’s Chemical Biology Program. “The epichaperome acts like a scaffold that allows the misconnectivity of proteins, and in turn, neuronal circuits collapse and underlie age-related cognitive dysfunction.”

Based on their discoveries, Dr. Chiosis and her colleagues, including neuroscientists at Weill Cornell Medicine, the New York University School of Medicine, and the Nathan Kline Institute for Psychiatric Research, developed a term to describe this phenomenon: protein connectivity–based dysfunction (PCBD). “Many people who study Alzheimer’s are thinking about circuits in the brain. But there’s no clear understanding of how stressors due to aging and the environment change the way proteins interact,” she says. “Our research demonstrates that epichaperome formation rewires brain circuitry in Alzheimer’s by enabling proteins to misconnect, leading to downstream PCBD and cognitive decline.”

Armed with this knowledge about epichaperomes, Dr. Chiosis and her team treated a mouse model of Alzheimer’s with PU-AD. Like PU-H71 in cancer, PU-AD uncouples the faulty protein networks created by epichaperomes. They found that PU-AD corrected how proteins interacted in the mice. The drug was able to fix signaling problems between neurons. The treated brains resembled those of normal mice.

Further research showed that after Alzheimer’s mice were given PU-AD, they performed much better in tests that evaluate memory function. They also survived longer than mice given a placebo. This indicates that the drug treatment was safe and effective.

The first clinical trial of PU-AD launched in 2019 to confirm in healthy volunteers that the drug is safe. PU-H71 is already in clinical trials for lymphoma, breast cancer, and other cancers. That drug appears to be safe, and researchers are optimistic that the same will hold true for PU-AD. PET imaging versions of both drugs are also being studied in clinical trials as a way to track changes in cells and PCBD in living patients, with the hope that the drug treatment reverses damage in real time.

MSK holds the intellectual rights related to PU-H71 and PU-AD. Samus Therapeutics, of which Dr. Chiosis has partial ownership and is a member of its board of directors, has licensed PU-AD, PU-AD PET, PU-H71, and other rights under an exclusive licensing agreement. MSK has institutional financial interests related to Samus in the form of intellectual property rights and associated interests by virtue of licensing agreements between MSK and Samus.