Dana Pe’er is Chair of the Computational and Systems Biology Program at the Sloan Kettering Institute (SKI). She came to Memorial Sloan Kettering Cancer Center in 2016, with the goal of bringing her mathematical and computational expertise to bear on the problem of cancer.

An expert in single cell analysis and machine learning, Dr. Pe’er was recently named a Howard Hughes Medical Institute Investigator — one of the highest honors in biomedical science. As part of that designation, she will receive approximately $9 million over a seven-year term, with opportunity for renewal.

Here, Dr. Pe’er talks about her early love of science, her approach to mentoring trainees, and some of the challenges that women face as scientists.

I think I was born a scientist. Probably my strongest trait is curiosity. I’m also very mathematical and naturally see patterns in the world around me. There are stories about me from when I was very young where this became obvious. The one that my dad and mom like to tell is how we were driving, and I was trying to figure out how far a particular street went. And I said, “The road might end, but the direction of the road is infinite.”

My dad was doing a PhD in mathematics at the time on the topic of different powers of infinity. I must have heard the word “infinity” in the background.

I figured out pretty early on that I wanted do biology and math. I was an avid hiker. I loved nature. I saw patterns in flowers and other aspects of nature. Then, when I was in high school, everyone said, “You should do physics because you’re so strong in math.” I was always in the most advanced, commando math class. This supposedly meant I was supposed to do physics. But what I actually wanted was to discover mathematical formulae that describe the beautiful patterns in biology.

At first, I thought I would do neurobiology. Then I heard [mathematician and geneticist] Eric Lander give a talk on genomics. This was just at the very beginning of sequencing the human genome. And I thought, “I want do that!” I really liked the idea of cracking the genome, the code of life.

All of your schooling was in Israel?

All in Israel. And all at the Hebrew University of Jerusalem. I was on the same campus — outside of the time I spent in the army — from seventh grade to the end of my PhD. I then left Israel to do a postdoc in Boston, with [geneticist] George Church at Harvard Medical School.

Did you have any important scientific mentors?

Aviv Regev, who’s now the head of research and development at Genentech, was my first biology teacher. We were peers in graduate school — she a biologist, and I a computer scientist. We were each very interdisciplinary in our approaches, and I learned a lot from her about how to abstract biological concepts.

Daphne Koller, who was a professor at Stanford at the time, now CEO of Insitro, was never officially my mentor, but I definitely view her as a main mentor. From her, I learned how to use the machine learning toolbox to model the real world. She was also incredibly supportive in my early faculty days.

George Church, my postdoc advisor, was a very hands-off mentor. But in a few key conversations, he completely changed me as a scientist. I came into his lab thinking like a computer scientist: “Okay, what computational summersaults can I do around this dataset to try and extract information from it?” I’m still pretty good at doing that. But George pushed me to focus on the biological question. And after clearly articulating my biological question, figuring out: “What data do I need to answer that question?” And if the technology doesn’t exist, “What technology can get me the data that I need?” It was in George’s lab that I realized that I needed single cell resolution to address most of the biological questions that I am most passionate about.

I care about my trainees and bend over backward for them. I am a mama bear, and they become my children for life.
Dana Pe'er computational biologist
Back to top

How did you get into cancer research specifically?

The great thing about computational biology is that a rigorous and robust method is generalizable. That is, one could apply the same algorithm to baker’s yeast, worm, fruit fly, mouse, and human disease. This has allowed me to have a lot of fun, explore different interests, and frequently shift my biological focus. When I started my independent lab, my key question was: “How does variation between individual genomes encode for the observed differences in phenotypic [observable and measurable] traits?” I made a lot of progress on that question in yeast.

With humans, the problem is so much harder, the genome is so much bigger, and the impact of each individual variation is miniscule, not to mention the large environmental effects on phenotypes. Then I realized that the one place where genetic variation has a staggering effect is in cancer. Once I realized that the theoretical methods I had originally designed for yeast could shed meaningful insight on cancer, I felt morally compelled to bring my mathematical toolbox to the real world, where I might help real patients. I had just lost my mom to ovarian cancer, so it was also very personal.

What would you like prospective grad students or postdocs to know about your approach to mentoring?

I care about my trainees and bend over backward for them. I am a mama bear, and they become my children for life. But I also expect a lot of independence, innovation, abstract thinking, and hard work from them. I expect a lot of out-of-the-box thinking, because I get totally bored by recipe following and wheel cranking.

Not cranking a wheel, having an entirely novel thought that allows you to abstract and find patterns in messy, complex biology — this is hard. It’s not for everyone. But if you’re up for it, I’ll roll up my sleeves and help you succeed.

Learn more
Back to top

What have been the greatest challenges of being a scientist?

There are two big challenges. The first is related to being a scientist and a mother. I always felt torn and guilty. I have two amazing daughters. I tried to be as much of a mother as I could, but I was also very busy and not always present. I was extremely lucky to have a husband who believed in being a very present father, since I wouldn’t have been able to do what I do without him being such a super dad.

I am proud, though, that I gave my daughters a good role model, demonstrating that women could and should shoot for the stars. They are both extremely driven and talented.

The other big challenge has been being a woman in science. I think that people outside the field don’t realize what women in science face — the daily microaggressions, the dismissiveness. Women are constantly fighting for recognition that a male colleague would get so much more easily. It’s a very real and damaging problem.

What do you think needs to change in the science community to fix this problem?

I think change will take time. There’s no magic bullet. The old guard sits in powerful places, making decisions from the top down. One of the things that I think young male scientists can do — whether they’re students, postdocs, or junior professors — is to make more of an effort to counter the dismissiveness that women face. People are shy about saying positive things. At times, I was down and felt like quitting. The power of a rare compliment or a positive statement by someone kept me going. Scientists often think: “It’s awkward to say something nice. We don’t do that in science.” But lending encouraging words now and then can uplift a person and go a long way toward improving what can be an unwelcoming environment.

When I came to MSK, it was such a contrast from my previous academic home. For the first time, I felt truly appreciated and welcomed. It was also an incredibly collegial and collaborative environment. I liked working with all these amazing, brilliant, creative people. I learned so much from my colleagues those first few years in MSK.

You mentioned your supportive husband. How did you two meet?

I met him at a fondue party that my friend hosted. She was trying to set me up, so she invited three bachelors and me. She didn’t say that I was being set up (and I am very naive). She just said, “Look, I have this fondue set and there’s six forks and we only have five people.” And, well, I am a foodie.

Itsik and I met, and it was love at first sight; I was walking on clouds. We were trying to show off, each bragging about doing dangerous things in the hiking realm, like climbing up waterfalls. Years later, we learned that each hoped the other person wouldn’t hold us to the crazy stuff we proposed.

I remember we also talked about food. I love to cook, and I was talking about all my favorite pizza recipes. My husband said, “Here are my pizza recipes” and quoted the phone numbers of the local Domino’s Pizza branches.

What does being named a Howard Hughes Medical Institute Investigator mean to you?

The money and the prestige are great; more important is the freedom to follow my passion and curiosity. What was best about the entire process is that I had to spend a lot of serious time thinking: “What have I learned? Let’s put it all together in a more systematic fashion, see the big picture, and map what is the next big thing I want to do.” The generous support from HHMI will allow me to do exactly that. 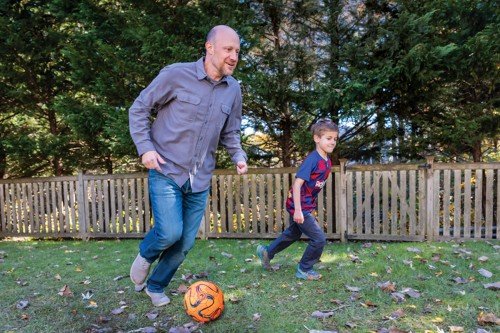 MSK News Winter 2021/2022
Translational research at MSK is speeding up discoveries to help patients like Mark Denisiuk.
Learn more
Back to top
Navigate this article