At Memorial Sloan Kettering, social workers hope people cope with the logistical and emotional difficulties of cancer. Learn how Penny Damaskos, Director of Social Work at MSK, came into the field and what she’s learned about resilience along the way. She was recently awarded the prestigious Wholeness of Life Award from the HealthCare Chaplaincy Network for helping patients and their loved ones heal in mind, body, and spirit.

How does a social worker differ from a counselor or a psychiatrist?

We provide similar services, including individual and group counseling. But social workers also develop programs as well as help people with practical needs, like transportation to treatment. We often partner with the Department of Psychiatry and the Counseling Center for distress screenings to help patients cope better.

How did your master’s degree in English lead you to social work?

I had an interest in narrative and the early works of George Eliot. She wrote novels that included events that are not openly discussed. This made them more realistic to readers and allowed for discussion of taboo subjects. In a way, that’s what we do. Social workers help people talk about topics that we as a culture have difficulty discussing, such as death and dying.

What made you focus on people with cancer?

When my friend Angela got sick, her mother told me that the need for family and caregiver support was critical. That made me think, OK, that’s an area I could focus on. My aunt also died of breast cancer. I became close to her and it was a very intense time when I learned a lot about myself. Those two experiences really impacted me. 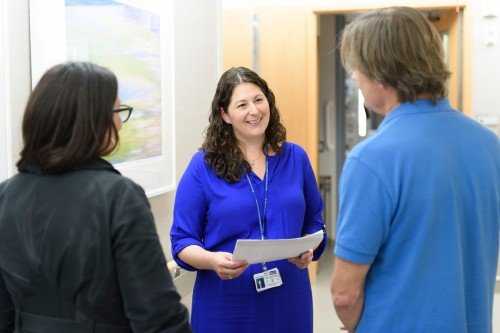 Social Work Support
At Memorial Sloan Kettering, social workers play an important role in providing emotional support and guidance to people with cancer, as well as, friends, families, and caregivers. Learn more about our services.
Learn more
Back to top

You worked at another New York City hospital during 9/11. What do you remember about that experience?

Social workers who dealt with crises like cancer were specially requested because we had the expertise to deescalate situations. We were with the police when they were talking with families. I met families of Cantor Fitzgerald employees in a hotel ballroom where everyone was gathering. The company lost nearly 700 people. That was very powerful. I remember it being really quiet even though so many people were there. Later, I did a lot of support for the staff where I worked. There was so much general anxiety about living in New York City. We had to help them manage the uncertainty that had become our new normal.

You started your career at MSK and later returned. What brought you back?

There was an opening to run the Resources for Life After Cancer program, which was co-founded by Jimmie Holland. (Read more about Dr. Holland.) She noticed that when patients finished treatment, that was an unexpected crisis point. I always hoped to come back and I was interested in survivorship because it’s about reflecting and post-traumatic growth. It is a time when people develop coping mechanisms, deepened relationships, and a better understanding of themselves, and so many of our former patients need help understanding the impact of their experiences.

You’ve studied resilience in oncology social workers. What have you found?

It’s important to go through hardship in order to develop resilience, but it’s how you go through it that really matters. Some of us have some innate resilience and some of us need to develop it more. What’s really important is how you process difficult experiences and learn from them — how you adapt what you’ve learned to other difficult situations. You don’t do the same thing each time because you have to be flexible. I think we teach each other resilient ways of responding to the complex and often stressful situations we manage every day.

Can the ability to connect with others be learned?

Yes. We all have an ability to converse with people, but there are ways of listening that are more about assessment, examining, and reflection that are beyond the everyday level of engagement. Active listening is an important part of making meaningful connections.

What is the best compliment someone could give you?

That after a discussion, they were able to use the tools or insights at another point in life. To me, that is just so important.