MSK researchers report advances in the treatment of various types of lymphoma at the annual meeting of the American Society of Hematology.

The American Society of Hematology (ASH) annual meeting is the world’s premier event devoted to the study of blood cancers and disorders. More than 25,000 people are attending the 2019 assembly, held December 7 through 10 in Orlando, Florida. Memorial Sloan Kettering researchers are reporting important progress in treating lymphoma.

T cell lymphomas are rare types of non-Hodgkin lymphoma that too often recur after initial chemotherapy. Better therapies are urgently needed for many patients, and MSK researchers have been testing targeted therapies that turn off molecular pathways driving T cell lymphomas to grow.

Two pathways that move through molecules called SYK and JAK, seem to play an important role in promoting two forms of T cell lymphoma to grow — peripheral T cell lymphoma (PTCL) and cutaneous T cell lymphoma (CTCL). A study of genetic mutations found in these cancers suggests that the cells may grow faster and survive because of multiple molecular signals within these pathways.

A targeted therapy called cerdulatinib, which is taken as a pill, has shown potential in other blood cancers because it inhibits both the SYK and JAK pathways. At the ASH meeting, MSK medical oncologist Steven Horwitz presented findings from a phase 2 study testing cerdulatinib in 61 people with PTCL or CTCL that didn’t go away or came back after other treatments. The drug appears to be safe and somewhat effective in both lymphoma types, primarily in specific subtypes.

Cerdulatinib seems to work especially well against a specific type of PTCL called angioimmunoblastic T cell lymphoma. In this group of 22 people, 41% had a complete response, meaning no tumors were detectable by PET scan after treatment.

Dr. Horwitz says this means that in addition to finding a new treatment to help people with T-cell lymphomas, researchers may be able to identify a molecular marker that better predicts whether the treatment will work in a specific person.

“If you can understand what determines whether a drug works, it makes it possible to more intelligently design combination therapies, which is where we think these targeted therapies will be able to make the greatest impact against lymphomas,” he says. 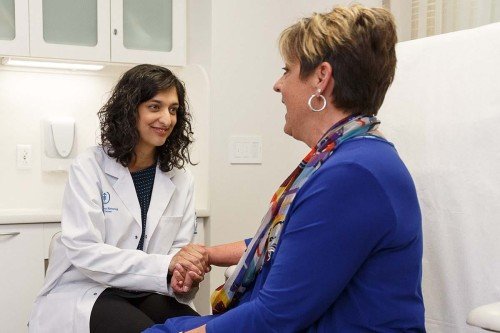 Lymphoma
Lymphoma is a blood cancer that starts in the body’s immune system cells. It is one of the most common forms of cancer in adults. Learn more about treatment options for all types of the disease.
Learn more
Back to top

Hodgkin lymphoma is usually curable with chemotherapy and radiation, but some people don’t respond to treatment or the disease comes back. Until recently, the second-line treatment for these patients typically involved combinations of fairly toxic chemotherapy aimed at wiping out the cancerous cells.

In the last decade, two new drugs have been approved for patients with recurrent Hodgkin lymphoma. Brentixumab vedotin (Adcetris®), approved in 2011, is an antibody linked to a cancer-killing toxin. Nivolumab (Opdivo®), approved in 2016, is an immunotherapy drug that blocks the actions of a molecule called PD-1 on the surface of immune cells.

Both drugs have improved the outlook for people with resistant or recurrent Hodgkin lymphoma. They are generally less toxic than chemotherapy and have helped people survive until they can receive a stem cell transplant.

VIDEO | 04:22
Our doctors and patients explain why MSK is leading the way in diagnosing and treating lymphoma.
Video Details

Researchers have been investigating whether combining brentixumab vedotin and nivolumab can be even more effective. Last year, encouraging results were reported from a phase I/II clinical trial testing the drug combination in people with relapsed or refractory Hodgkin lymphoma.

At this year’s ASH meeting, medical oncologist Alison Moskowitz reported longer-term findings from the same trial based on a larger number of patients. The results were impressive: Among 91 patients, 67% had a complete response to the combination.

“This indicates that we have a high chance of curing patients in the second-line setting with a well-tolerated treatment,” she says. “This field is evolving really quickly.”

However, venetoclax has not worked as well as expected in people with DLBCL. The problem is that in DLBCL cells, BCL2 appears to have a backup actor — a protein called MCL1. Blocking BCL2 only is not enough to kill most DLBCL tumors because the cancer cells can still rely on MCL1 to survive.

In 2018, a team led by medical oncologist Anas Younes showed that blocking the BCL2 and MCL1 proteins with a two-drug combination effectively killed DLBCL cells in a lab dish and in mouse models. However, this combination therapy also appeared to be toxic when used at sufficient doses to stop the cancer.

At the 2019 ASH meeting, Neeta Bala Tannan, a postdoctoral researcher in the Younes laboratory, presented details on a potential way to reduce this toxicity using tiny particles called nanoparticles. These nanoparticles are designed to home in on an inflammatory protein called P-selectin, which is found in abundance in blood vessels that nourish cancer cells. When loaded with either venetoclax or an MCL1 inhibitor called S63845, the nanoparticles can ferry the drugs selectively to the DLBCL cells.

In mouse models, this precise delivery enabled researchers to lower the drug dosage because it was getting to the right spot. Using the nanoparticles to deliver either drug — even if the other was given without nanoparticles — lowered toxicity while effectively treating the cancer.

“This novel drug delivery approach shows promise for improving treatment of DLBCL by increasing effectiveness while reducing treatment-related toxicity, but it still needs to be tested in people,” Dr. Younes says.

Read about other MSK science at ASH here.