Researchers have long been puzzled by rings of DNA that lie outside chromosomes in cells. A new study suggests that DNA from these circles inserts itself into chromosomes and triggers the uncontrolled cell growth that is the hallmark of cancer.

People typically visualize human DNA packaged within the 23 pairs of chromosomes in a cell’s nucleus. But this does not tell the whole story. In some cells, small rings of additional DNA float right alongside the chromosomes.

Scientists have known about these tiny DNA circles, called extrachromosomal DNA, for decades. But they remained understudied and poorly understood. In recent years, however, these mysterious loops have drawn the attention of researchers. It turns out that as cells divide, some daughter cells (the new cells resulting from the division) end up with large numbers of DNA circles. This inheritance tends to speed up the cells’ growth, suggesting that DNA circles play a role in turning normal cells cancerous.

Now an international research team has discovered that these DNA circles can contribute to the development of childhood cancers. They found that DNA sections can separate from chromosomes to form circles. The circles later reinsert themselves into the chromosomes at a different location. This disrupts the orderly sequence of genetic information and causes things to go haywire. One result is the runaway growth that leads to cancer.

We were surprised at the extent to which the circular DNA is reintegrating into chromosomes and having profound effects on genetic function.
Richard Koche computational biologist

The team was led by Memorial Sloan Kettering computational biologist Richard Koche and physician-scientist Anton Henssen of Charité University Hospital Berlin. They made this discovery by studying extrachromosomal DNA in neuroblastoma cells. Neuroblastoma develops in immature nerve cells. It is the most common form of cancer in infants.

“This challenges the conventional understanding of how these DNA circles affect the genome and contribute to cancer, especially childhood cancers,” Dr. Koche says. “We were surprised at the extent to which the circular DNA is reintegrating into chromosomes and having profound effects on genetic function.”

The findings are reported in Nature Genetics.

The scientists analyzed neuroblastoma tissue samples from 93 children. They combined advanced sequencing techniques with pioneering bioinformatics algorithms to construct a detailed genomic map of the circular DNA. The circular DNA was surprisingly pervasive. Each neuroblastoma cell contained an average of 5,000 rings. The sequencing revealed how specific DNA sections separate from a chromosome to form the circles before reintegrating into the chromosome at a different location.

“This process provides insight into how even young cells, like those found in children, can transform into cancer cells,” Dr. Henssen says.

“We were able to show that certain types of circular DNA may lead to worse clinical outcomes,” Dr. Koche explains. “Testing for their presence may make it easier to predict the course of the disease.” The research group plans to conduct follow-up studies to investigate this idea.

The discovery sheds additional light on the process by which childhood cancers arise as a result of rogue DNA wreaking havoc on the genome. Cancer is primarily a disease of the aged. Researchers had long been puzzled by why tumors develop in children, who haven’t had enough time for large numbers of random mutations to accumulate. In recent years, scientists have made important discoveries showing how this happens.

In 2017, Drs. Koche and Henssen were part of a team led by MSK cancer biologist Alex Kentsis that found that a gene called PGBD5 plays a role in causing many pediatric cancers by creating mutations that turn cells cancerous. An enzyme made by the gene snips out DNA segments and flips them or moves them to a different location within the genome. This DNA transfer can drastically alter normal gene function and trigger cancer.

Dr. Koche says the new study could provide important clues to the causes of other cancers, including adult cancers. Childhood tumors are a good model for studying genetic questions because they have fewer mutations than adult tumors, so there is less background noise muddling the genomic picture.

“Studying this process in the relatively quiet genomes of these pediatric tumors may help illuminate similar mechanisms that were previously missed in more complex adult cancers,” he says. “Given the recent interest in circular DNA in a variety of normal and disease contexts, the current study may have implications for a broad range of tumor types.” 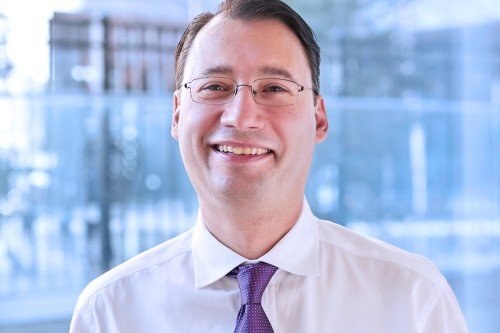 Jumping Genes and the Dark Genome: MSK Researchers Gain New Insight into Childhood Cancers
Researchers have discovered a genetic mechanism that may trigger most childhood cancers.
Learn more
Stay Informed
Get the latest news and updates on MSK’s cancer care and research breakthroughs sent straight to your inbox with our e-newsletters.
Newsletter Sign Up

Jumping Genes and the Dark Genome: MSK Researchers Gain New Insight into Childhood Cancers
Getting to the Root of Pediatric Cancers
Neuroblastoma in Children
Richard Koche
The Alex Kentsis Lab