Breast cancer in men accounts for less than 1% of all cases of breast cancer. But because breast cancer is so common, that still amounts to about 2,700 cases in the United States every year.

The current treatments for men with breast cancer are largely based on what doctors have learned from treating women. But that is changing, thanks to a comprehensive research program from Memorial Sloan Kettering Cancer Center (MSK) and several leading international breast cancer research groups.

As we continue to learn more about male breast cancer, here is what Dr. Gucalp says people should know.

What are the risk factors for male breast cancer?

Aging is the primary risk factor for breast cancer in men as well as in women, says Dr. Gucalp. However, men tend to develop the disease in their late 60s or 70s, which on average is 5 to 10 years later than women.

Increased amounts of the hormone estrogen — above the low level that is normal for men — as well as decreased levels of testosterone can also result in a higher risk for male breast cancer. These altered hormone levels may be the result of chromosomal disorders such as Klinefelter syndrome; certain conditions that affect the testicles; liver dysfunction; or medications that affect the balance of hormones, including some drugs used to treat prostate cancer. An alteration of hormone levels can also occur in transgender women who take or have taken estrogen hormones.

As with breast cancer in women, a family history of the disease and mutations in the inherited genes BRCA1 and especially BRCA2 are also linked to higher incidence of breast cancer in men. These genes are linked to other cancers in men as well, such as prostate cancer and pancreatic cancer. For this reason, MSK experts, such as breast oncologist and geneticist Mark Robson, recommend that men diagnosed with breast cancer consider undergoing BRCA testing.

What are the symptoms of male breast cancer?

Most men with breast cancer are diagnosed after finding a lump or mass. “It’s very important for men to know that any mass in the breast area should not be ignored,” Dr. Gucalp says.

“This symptom doesn’t always set off an alarm for a man to see his doctor,” she adds. “A lump doesn’t mean it’s breast cancer — more often it’s an infection or the mass is benign. But a breast mass in a male patient should always be evaluated by a physician.”

Sometimes, a lump isn’t the first symptom. Nipple discharge or nipple inversion should also be looked at by a doctor.

How is male breast cancer diagnosed?

The tests used for breast cancer diagnosis are the same in men and women: a mammogram with or without an ultrasound, followed by a biopsy, in which a small sample of the tumor is removed.

“The biopsy is important to confirm a diagnosis of breast cancer and to analyze the tumor,” Dr. Gucalp says. Studies have shown that more than 90% of male breast cancer is estrogen receptor-positive — meaning that the cancer may receive signals from estrogen that could promote tumor growth. This is a higher rate than what is seen in women; researchers are studying why that is the case. It’s important information for developing the best treatment plan.

How does breast cancer differ in men and women?

In 2016, MSK breast cancer pathologist Jorge Reis-Filho published a study in which his team sequenced the tumors of 59 male breast cancer patients. These men had a lower incidence of HER2-positive status, and fewer alterations in the genes PIK3CA and TP53 — the two most frequent in female disease. The researchers also found that men with breast cancer were more likely to have mutations in genes that affect DNA repair — including BRCA2.

“The most important message is that we should not extrapolate the results of studies we do in female breast cancer to male breast cancer,” Dr. Reis-Filho says. “When it comes to specific genetic alterations, there are important differences.”

How is male breast cancer treated?

The most common treatment for male breast cancer is mastectomy — surgical removal of all breast tissue. Depending on the stage of the disease, patients may also be given radiation treatment or chemotherapy. Treatment and survival outcomes are very comparable to those of women.

What research is being conducted on male breast cancer?

In 2019, the U.S. Food and Drug Administration (FDA) recommended that men be included in clinical trials for breast cancer. Since 2016, MSK has been one of the leading centers in an international effort to study male breast cancer.

A clinical research trial that expands the molecular analysis of tumors and increases the focus on how different treatments affect quality of life and other health conditions is currently underway.

Dr. Gucalp and her colleagues are also working to develop clinical trials designed specifically for men with breast cancer, as well as to expand current breast cancer trials to include more male patients. 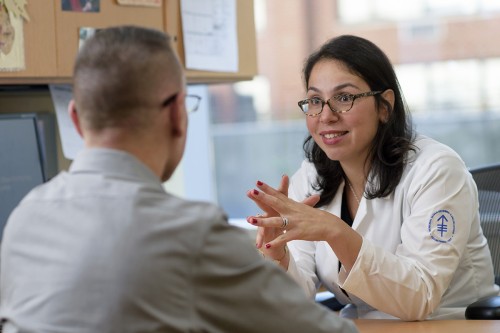 Male Breast Cancer
Learn about how male breast cancer is diagnosed and treated at Memorial Sloan Kettering.
Learn more
Back to top
Navigate this article
Stay Informed
Get the latest news and updates on MSK’s cancer care and research breakthroughs sent straight to your inbox with our e-newsletters.
Newsletter Sign Up