“Your cancer has spread.” It is a phrase said too many times, and one that no patient wants to hear. Beyond a cancer diagnosis itself, learning that the cancer has spread, or metastasized, can feel like a death sentence. And indeed, the situation is grave.

MSK is revolutionizing the way cancer is understood, diagnosed, and treated. Your generosity makes this possible.

Metastasis is responsible for more than 90% of cancer deaths. Once a cancer has metastasized, it is much harder to cure. That’s not only because more parts of the body are harmed by cancer’s relentless expansion but also because of the particularly aggressive tendencies of metastatic cancer cells themselves.

“Metastatic cancer cells are a completely different entity from the tumor that they started off in,” says Karuna Ganesh, a Josie Robertson Investigator at Memorial Sloan Kettering who both treats patients and has her own research lab in the Sloan Kettering Institute. “They’re more equipped to survive the stress of living in a new environment, and that makes them very difficult to get rid of.”

Metastasis is responsible for more than 90% of cancer deaths.

“Genetically, these cells are exactly the same,” Dr. Ganesh says. “They have the same mutations, the same alterations, that were in the primary tumor.”

But what distinguishes metastatic cells from primary tumor cells is a heightened ability to change their behavior by turning on and off different genes.

Yet plasticity is difficult to study with conventional approaches. That’s why, to tackle this important problem, Dr. Ganesh and her MSK colleagues have turned to an innovative technology called organoids.

Disease in a Dish

As their name suggests, organoids are tiny balls of cells that resemble organs in their structure and function. MSK scientists can create organoids from patient tumor samples and use them to study the process of metastasis under more realistic conditions. The technology is transforming the way researchers at MSK study cancer, providing information that conducting experiments in lab mice never could.

VIDEO | 02:22
Go inside the lab of Karuna Ganesh and learn what organoids are, what we can learn from them, and the potential impact they have for cancer patients.
Video Details

Working with MSK colorectal surgeons, Dr. Ganesh and her team have been able to generate colon cancer organoids from cells obtained from patients undergoing surgery for their cancer. They can then grow these organoids in the lab and watch how they change over time.

One thing they’ve learned this past year, and published in the journal Nature Cancer, is that not all the cells in a metastatic tumor sample are equally capable of growing into an organoid. Those that can are called metastasis stem cells.

They have some unique properties. Most notably, they produce a protein called L1CAM.

This sticky molecule is a normal part of the tissue repair process that is turned on in response to injury. In the colon, that injury may be colitis, an inflammatory condition of the bowel. Activating L1CAM in tissue stem cells is part of the way that the colon repairs itself. Stem cells making L1CAM can separate from their neighbors, migrate into the gap of a wound, and then start to fill it in with new cells.

But it turns out that L1CAM is also crucial for metastasis. Cells that cannot make L1CAM cannot effectively spread to new sites in the body.

More and more, scientists are learning that metastasis relies on the same pathways that normal body tissues use to repair themselves. In other words, instead of growing new tissue to repair a damaged organ, the metastasis stem cells help to regrow the tumor in another part of the body where they have taken up residence.

“We now understand metastasis as the regeneration of the wrong tissue — the tumor — in the wrong place — distant vital organs,” says Joan Massagué, Director of the Sloan Kettering Institute, whose lab has made some of the fundamental discoveries in this area and helped to galvanize the research paradigm. Under his leadership, SKI continues to be at the forefront of this research.

Viewing metastasis as regeneration gone wrong opens up potential treatment approaches. In Dr. Ganesh’s lab, for example, they are currently looking for drugs that might block L1CAM and thereby rob cancer cells of their ability to metastasize.

Hunting Down Cancer Stem Cells in the Brain

Stem cell plasticity is also believed to be at the root of a difficult-to-treat brain cancer called glioblastoma. Up until recently, scientists hadn’t been able to determine these cells’ identity and had few leads to search for them. That changed this past year when a multicenter team led by scientists at MSK published a study in Stem Cell Reports that identified a promising suspect: radial glia cells. Radial glia cells play a key role in building fetal brains — newly birthed neurons travel along them like train tracks to reach their home — but have not before been linked to cancer.

“The look and behavior of radial glia cells in the developing brain and the tumor stem cells that we have identified are so similar to each other,” says physician-scientist Viviane Tabar, Chair of MSK’s Department of Neurosurgery, who led the research. “We can’t say with certainty that radial glia cells are the same as tumor stem cells, but they are now very high on the candidate list.”

Once again, organoid technology was crucial to making the discovery. Rong Wang, a research associate in Dr. Tabar’s lab, was using tumor tissue that had been removed from patients to grow organoids. She noticed that some cells in the organoids had very long tails and divided in an unusual synchronized dance, much like radial glia.

Further analysis confirmed that these unusual cells also were present in dozens of tumor tissues taken from patients.

“Radial glia cells previously were not thought to persist in adulthood,” Dr. Tabar explains. “If glioblastoma tumors arise from them, that may mean that humans retain some fetal radial glia cells in our brains as adults. The other possibility is that the genetic and epigenetic changes in the cancer turn some of the brain cells back into cells that look very much like radial glia cells.”

Now that Dr. Tabar’s team has a lead suspect, they can begin collecting more evidence and can hopefully solve the mystery of this brain cancer. 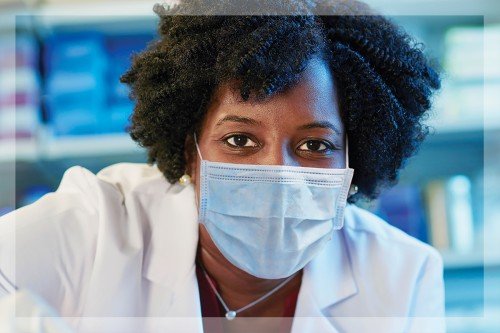 2020 Annual Report
Resilient. Resourceful. Dedicated. The year 2020 was like no other. Read how the MSK community rose up to meet every moment of the year with strength, perseverance, and total commitment to exceptional cancer care, research, and education.
Learn more
Back to top
Navigate this article

What Does Cancer Metastasis Have to Do with Wound Healing? More than You Might Think
What Organoid Models Can Teach Us About Metastasis
Karuna Ganesh
Viviane Tabar