Becky’s Illness Baffled Doctors — Until She Came to MSK

Becky Manning hadn’t been feeling well for seven months. Doctors couldn’t figure out what was going on until a biopsy revealed lung cancer. Find out what happened when she came to MSK for treatment.

As the executive director of a recreation center in upstate New York, Becky Manning stayed active as part of her job. In June 2017, she was training a group of lifeguards and jumped into the pool to demonstrate a rescue move. As she hit the water, she felt a pain that wrapped around the left side of her chest and made it hard for her to breathe.

Becky had experienced a similar pain years prior, and her doctor said that she had pulled a muscle. But this new experience unnerved her. She was getting over a cold that had left her coughing and feeling crummy. She thought the symptoms may be related.

Becky’s doctor ordered an X-ray, and the results pointed to pneumonia. Becky started on antibiotics. When a follow-up X-ray showed that the issue hadn’t resolved, a second doctor tested her for mononucleosis and Lyme disease. Both of those tests came back negative.

Becky continued working and raising her two young boys, Asher and Finnegan, with her husband, Peter. Her cough got better but never fully resolved, and around Thanksgiving she felt that same pain in her chest again. Her doctor had since left the practice so she saw a new one, who again diagnosed her with pneumonia. But that didn’t sit right with Becky. 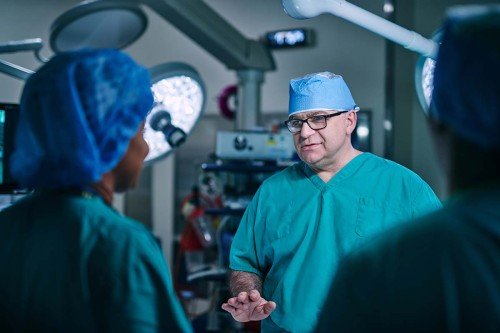 Surgery for Lung Cancer
Surgeries for lung cancer include lobectomy and pneumonectomy. Learn more about our experience and our approach to lung cancer surgery.
Learn more

A friend recommended that Becky see a pulmonologist, a doctor who specializes in the lungs and respiratory system. The pulmonologist wanted to do a bronchoscope, which is an outpatient procedure to look inside the lungs, to rule out cancer. Becky thought it was a drastic move — she was running four miles a day and felt pretty healthy otherwise — but her symptoms were not getting better, so she decided to do it. Unfortunately, the doctor’s equipment stopped working during the procedure, so he wasn’t able to get more than a few tissues samples. Those samples came back clear, however, and the doctor was excited to tell Becky.

“He said, ‘You should be feeling great,’ but I still felt really, really, bad,” she says. “So he had me get another X-ray, and it showed that my condition had worsened.” Becky took more steroids, but her symptoms never fully resolved. Doctors considered parasites, shingles, and even HIV/AIDS.

When Becky experienced the chest pain for a third time in January 2018, doctors ordered a CT scan. They thought they saw a blood clot, so Becky went to the hospital. At this point, Becky and her family were feeling frustrated.

“My husband said, ‘You need to figure out what is going on with my wife,’” Becky remembers.

Finally, doctors did a biopsy of Becky’s lung. Two days later, she found out she had advanced lung cancer. It was a shock: Becky was young, in good health, and had never smoked. The doctor offered her the option of having surgery right away.

“I said, ‘Listen, I’m going somewhere else,’” she says. A friend recommended that she go to Memorial Sloan Kettering.

In January 2018, Becky had her first appointment with David Jones, the Chief of Thoracic Surgery at MSK. She recalls how attentive he was to her and Peter.

“He made it feel like he had all the time in the world to listen to me,” Becky says.

Dr. Jones told Becky she had an adenocarcinoma, the most common type of lung cancer in the United States. He wasn’t surprised that the other doctors Becky saw hadn’t considered it.

“Everything depends on the lens you view it through,” he says. “I think doctors today still don’t think you can be a young person who never smoked and have lung cancer. We need to do a better job in educating doctors and the public that this can happen.”

I think doctors today still don't think you can be a young person who never smoked and have lung cancer. We need to do a better job in educating doctors and the public that this can happen.
David R. Jones Chief, Thoracic Surgery

Becky was happy to have met Dr. Jones. She had an issue with her insurance and wasn’t sure if she was going to be able to get care at MSK. But thankfully, MSK’s Patient Financial Services group stepped in to handle the matter.

“MSK helped me with that, and then I got approval,” Becky says.

Dr. Jones was confident that surgically removing the tumor was the best first step.

“He said, ‘We think we can handle this, and you have a good prognosis,’” she says. “We felt really good about that and went forward with the plan.”

Surgery and a Setback

Becky had a three-hour surgery at MSK in February 2018. Dr. Jones removed all of the tumor, but it was larger than he and his team had anticipated. It was a stage III tumor instead of what they had thought was stage II. That can happen sometimes. Scans give a good estimate of a tumor’s size, but it’s impossible to know what a surgeon is dealing with until seeing it up close.

While none of her lymph nodes were positive for cancer, Dr. Jones recommended that Becky consider chemotherapy to wipe out any cancer cells possibly lingering in her body. That was difficult for Becky to hear: She thought once surgery was over she could put cancer behind her.

“I thought I would be cleared to focus on getting better,” she recalls. “I had heard a lot of stories about chemotherapy making you feel very sick. I do not have time to be sick, not even for one day. I have two young boys and a full-time job.”

Medical oncologist Marjorie Zauderer was sensitive to Becky’s feelings and helped her choose a treatment regimen that had minimal impact on her day-to-day life.

“Cancer makes people feel like they don’t have control over their own lives anymore, and that’s really hard,” says Dr. Zauderer. “I said, ‘Here are the options. What’s practical for you? What are you most afraid of? What’s most important to you?’ That way, people have a sense of control in the fight. It’s not just something happening to them.”

Becky decided to start on chemotherapy. The medicine left her tired and nauseous at times, but she responded well to it.

Listen to your body. If you feel like something's not right, get it checked.
Becky Manning

As a working mom with two small boys, Becky was not used to taking things slow. Her community rallied behind her, bringing meals and babysitting her kids at every opportunity. Her husband and her sister devoted themselves to caring for Becky.

“You can’t quit when you have kids,” she says. “My sister would fly in the middle of the night, drive two hours, and then drive me three hours in the snow to get to the city for my appointments.”

After Becky completed chemotherapy, Dr. Jones recommended that she participate in a clinical trial that was evaluating an immunotherapy drug, nivolumab (Opdivo®), following surgery for lung cancer. Immunotherapy unleashes the brakes on the immune system so it can better fight cancer.

Nivolumab made Becky very tired, and she developed arthritis. That didn’t bode well for her active lifestyle. After eight months, Becky stopped taking the drug. She still felt exhausted, but she could be more active.

“Two months after stopping nivolumab, I could actually go for a run and not walk,” she says. “I felt like I was finally making progress.”

Becky’s care team is monitoring her to see what impact the nivolumab may have had on her treatment.

Reflecting on the Past, Looking toward the Future

Today, Becky feels good, and she’s still working. She is no longer on active treatment. She has no evidence of disease and comes back to MSK every six months for follow-up appointments with Drs. Jones and Zauderer. She remains proactive about her health and encourages others to remain vigilant and persistent.

“Listen to your body,” she says. “If you feel like something’s not right, get it checked.”

Despite living hours away, Becky is grateful she chose MSK for treatment.

“She has a team here at MSK that’s always looking out for her and will be for the rest of her life,” says Dr. Jones. “What immediately hits people when they come to MSK is a sense of compassion, understanding, and expertise. I think that resonates.”

Dr. Zauderer hopes that the further out Becky gets from her cancer experience, the less space it will occupy in her mind.

“I think when you’re in the thick of it, cancer dominates everything,” she says. “The hope is as it gets further away, it becomes one of the many things that make Becky Becky. It’s just part of her story. And I think she’s on her way there.”