MSK is collaborating with the Movember Foundation to raise awareness and conduct research into men’s health issues. One administrator at MSK Monmouth, himself a survivor, is growing a moustache to help the cause.

After surviving testicular cancer, Greg Mason knew he wanted to give back. But he didn’t want to just donate his money or time to the hospitals where he was treated or an advocacy group that supports the cause — he wanted to dedicate his entire career to cancer care.

Greg, 35, was diagnosed with testicular cancer 14 years ago and underwent a left orchiectomy (removal of the testicle) at a local hospital in Staten Island followed by a left retroperitoneal (abdominal) lymph node dissection by urologic surgeon Joel Sheinfeld at Memorial Sloan Kettering.

It was the care he received from Dr. Sheinfeld that led Greg to pursue a career at MSK. In the past 11 years, he has held seven positions at five outpatient MSK locations — he started as a care coordinator and is currently an administrator of ambulatory care at MSK Monmouth. This month, Greg is going above and beyond his job responsibilities at MSK by committing his upper lip to a good cause.

The Movember Foundation was founded in Australia in 2003 with the simple goal of reducing the number of men dying “too young” 25% by 2030. Each year, the foundation dedicates the month of November to raising awareness about men’s health issues, mainly prostate cancer, testicular cancer, mental health, and suicide prevention. They ask people to get involved through the Move Challenge, centered on physical activity; event hosting; and the Grow a Mo challenge to grow and groom a moustache. All three ask participants to involve friends and family to raise funds for men’s health.

On October 31, Greg shaved off his beard — which he’s been sporting for years — to start the moustache from scratch. 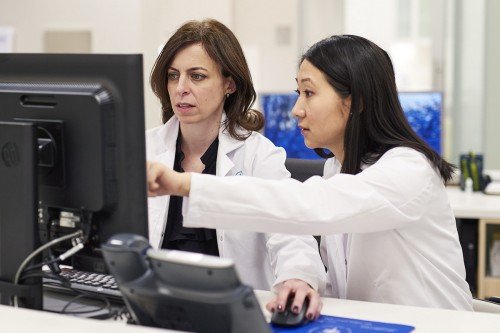 Prostate Cancer Treatments
How is prostate cancer treated? The approach depends on if the cancer has spread beyond the prostate. Learn more about MSK's approach for surgery, radiation therapy, and more.
Learn more

“It’s just different seeing myself in that way. My daughters were shocked when I shaved my beard off,” he says, adding that it was funny to talk to his three-year-old about men’s health.

His mo-growing experience has only been made more special by the participation of his father, David, 67, himself a cancer survivor who was treated for colon cancer 20 years ago and for prostate cancer just this February. Though David thought the idea of growing a moustache was foolish at first, he eventually agreed.

“It’s comical. I’ve never seen him with facial hair, so it’s such an interesting view,” Greg says. “But it’s also a proud moment. It’s a bonding experience to change the face of men’s health in collaboration with my dad.”

In addition to creating conversations about men’s health — and a few laughs about facial hair changes — the Movember Foundation is also funding real research at MSK.

One project with ties to Movember, a prostate cancer registry called Ironman, began two years ago and is led by Philip Kantoff, Chair of the Department of Medicine, along with Daniel George from Duke University and Lorelei Mucci from Harvard School of Public Health. The registry aims to enroll 5,000 patients at several institutions worldwide starting in early 2017 to inform clinical care of people with aggressive disease. Ironman receives the greatest amount of funding from the Movember Foundation, but also receives support from pharmaceutical companies.

“The idea behind the project was to create a registry of men with advanced prostate cancer to try to understand treatment patterns, optimal sequencing of treatments, and biomarkers for determining response to different treatments,” says Dr. Kantoff, who is also growing a moustache this month.

I've certainly seen the benefits of MSK firsthand, both for me and for my father. I see the great work we're doing and the impact that it has.
Greg Mason administrator of ambulatory care at MSK Monmouth

Another important project that brings the Movember Foundation and MSK together is TrueNTH (pronounced “true north”). TrueNTH is also a global effort involving more than 25 institutions — Andrew Vickers leads the team at MSK — and also aims to help patients make decisions about their care. Asking patients about their quality of life before prostate cancer treatment and what they hope their quality of life will be afterward is the driving force behind the program, says Mark Hedstrom, SVP of Global Operations for the Movember Foundation.

“The intent behind TrueNTH is to bring the man along that pathway, and also the partner, that leads them to the quality of life that they’re looking to achieve post-treatment,” he says.

Greg says he encourages all of his male friends, family members, and neighbors to stay aware of their own bodies, make an appointment for an annual physical, and not think they’re “strong enough” to overcome a change in health.

The simple fact that MSK is benefiting from money raised by the Movember Foundation only further motivated him to get involved.

“I’ve certainly seen the benefits of MSK firsthand, both for me and for my father. I see the great work we’re doing and the impact that it has,” he says. “I truly believe there is hope in the possibility to live in a world without cancer, and I think it’s because of the extraordinary work that MSK does on a daily basis.”