MSK doctors have been using a powerful genetic sequencing test called MSK-IMPACT to analyze the tumor DNA of patients to learn about their cancer. The test allows doctors to detect mutations and other genetic changes present in tumors — information that can guide treatment choices and, in some cases, identify patients who are candidates for a cancer clinical trial. Recently pathologists at MSK reached a major milestone when they sequenced a tumor from the 10,000th patient.

Memorial Sloan Kettering has reached a major milestone in bringing personalized treatments to more cancer patients. Our doctors recently used MSK-IMPACT®, a powerful diagnostic test that provides genetic information about a patient’s cancer, to sequence a DNA sample from the 10,000th patient.

“This phenomenal technology has enabled our physicians to extend the promise of precision medicine to many patients, including those with common or rare tumor types,” says David Klimstra, Chair of MSK’s Department of Pathology.

Since 2014, pathologists in the Molecular Diagnostics Service have been using MSK-IMPACT to analyze the tumor DNA of essentially all MSK patients with advanced cancer. The test allows doctors to detect mutations and other genetic changes present in tumors — information that can guide treatment choices and, in some cases, identify patients who are candidates for a cancer clinical trial.

Knowing the genetic makeup of the patient's cancer now helps us select the drugs most likely to be effective.
Marc Ladanyi Chief, Molecular Diagnostics

MSK-IMPACT was developed in the Department of Pathology by genomics researcher Michael Berger. Marc Ladanyi, Chief of the Molecular Diagnostics Service, led the clinical validation and implementation of this test together with molecular pathologist Maria Arcila and bioinformatician Donavan Cheng.

“As we pass this important milestone, I think we are well on our way to establishing a new paradigm for cancer care,” says Dr. Ladanyi. “As part of the standard initial assessment of cancer patients, we not only identify the exact type of cancer and how far it has spread but also determine the mutations that drive cancer cells to divide. Knowing the genetic makeup of the patient’s cancer now helps us select the drugs most likely to be effective in that patient.”

From Lab to Clinic

MSK-IMPACT is based on next-generation sequencing, which means that the most critical parts of the cancer genome — the complete string of DNA “letters” in a cell — can be profiled very quickly and with great sensitivity. Until 2014, this technology had been used only in the context of research studies. Moving the test into the clinical diagnostic setting as part of patient care was a noteworthy accomplishment.

Now the test is providing vital information for patients with a wide range of cancers, and not just for people initially treated at MSK — 63 percent of tumor samples analyzed were from MSK patients who were first seen elsewhere.

“In surpassing 10,000 patients sequenced, we have assembled a data set with enormous opportunities for data mining and discovery,” Dr. Berger says. “We have sequenced tumors representing rare types of cancer that have not yet been characterized at a genomic level. Further, MSK is the lead contributor to Project GENIE, an international effort to share tumor sequencing results across institutions.”

“The implementation of MSK-IMPACT as a routine molecular diagnostic approach has been a pivotal achievement for our clinical molecular diagnostic laboratory,” says Dr. Arcila. “In reaching this milestone, we are reminded that each patient’s cancer is unique and must be addressed as such.”

Results from the test are guiding clinical decisions for an increasingly large proportion of patients. For example, approximately one-third of MSK patients with non-small cell lung cancer now receive treatment dictated by the sequencing results.

In addition to providing essential clinical information about individual patients, the information generated by MSK-IMPACT is used for research by the Marie-Josée and Henry R. Kravis Center for Molecular Oncology (CMO), established in 2014 to speed the process by which genetic discoveries can be used to produce even better treatments.

Initially, MSK-IMPACT looked for abnormalities in 341 of the most important cancer-related genes; continued research has since increased that number to 410. This broad search for mutations — even when they may not be common to a specific type of cancer — can uncover important and sometimes unexpected therapeutic targets.

In some cases, finding specific mutations in tumors enables doctors to treat patients with drugs that would not have been considered had the mutation not been found. Other times, doctors may spare patients intensive or costly treatment when the genetic changes indicate that a drug is not likely to be effective.

We have assembled a data set with enormous opportunities for data mining and discovery.
Michael F. Berger genomics researcher

The genetic fingerprint of the tumor can also help pathologists identify the exact type of cancer. If doctors are unsure where a cancer started before spreading (a phenomenon known as cancer of unknown primary origin, or CUP), the sequence results can help pinpoint the site of origin. This can have important implications for treating the cancer, such as what type of chemotherapy to use.

In addition, MSK-IMPACT has helped MSK doctors accelerate the accrual of patients for cancer clinical trials, which are crucial to test new therapies without significant delay. Among major cancer centers, MSK now typically enrolls the most patients in multicenter trials.

Although MSK-IMPACT’s primary focus is on mutations in tumor cells, the test is also providing valuable information about germline (inherited) mutations that may increase the risk for cancer development. Pathologists using MSK-IMPACT always sequence both a tumor sample and a normal sample from the same patient. This is done to identify genetic differences between the two in order to pinpoint the cancer-causing mutations.

Now the information from the normal sample is also being put to clinical use. Beginning in the spring of 2015, patients have been given the option to find out if the test identified an inherited abnormality that may have predisposed them to the cancer for which they are being treated — or that may raise their risk of developing other cancers. For example, the normal sample may reveal a BRCA gene mutation, which have been linked to an increased risk for breast and ovarian cancer. 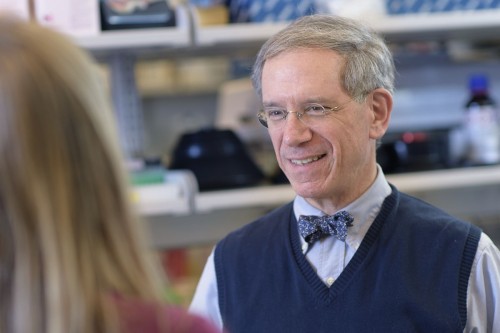 Many patients are now choosing to have MSK-IMPACT look for these germline mutations as well — in fact, doctors recently reached the 1,000-patient milestone for this type of analysis. Detecting inherited mutations can allow doctors to more closely monitor organs in which cancer may arise, and it offers the opportunity for the patient’s family to be tested for the mutation and screened for earlier detection if they also carry it.

Going forward, MSK hopes to expand MSK-IMPACT to even more patients, especially as insurers recognize its potential and become increasingly willing to pay for the test.

“People making reimbursement decisions for Medicare and private insurance companies are realizing this kind of sequencing is a bargain compared with many other studies done in cancer patients,” Dr. Klimstra says. “We’re optimistic that as the positive impact of genetic sequencing becomes more apparent, we’ll be able to use the test to benefit more people.”

Early developmental work for MSK-IMPACT was supported by a gift from the Farmer Family Foundation.