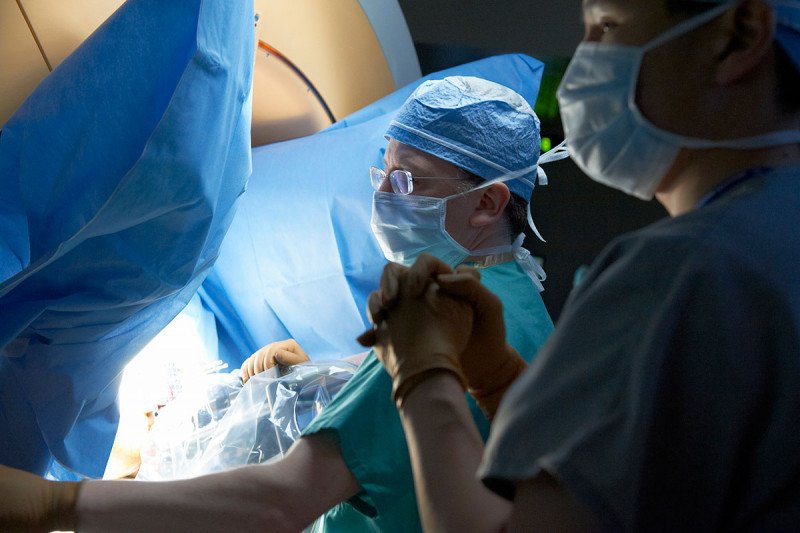 Memorial Sloan Kettering’s Department of Radiation Oncology consists of three services: our External-Beam Radiation Services in Manhattan and in our Regional Care Network, as well as our Brachytherapy Service. As nationally and internationally recognized leaders in their fields, members of our team are central players in advancing clinical research and establishing standards of care for patients who receive radiation therapy as part of their treatment or as a palliative measure.

In addition, since 2013, we have been treating patients with proton therapy in New Jersey. Proton therapy allows reduced doses of radiation to surrounding normal tissues, allowing reduced complications and increased doses to improve tumor control. This approach is particularly suitable for pediatric cancers, but is also being utilized in a variety of adult solid tumors.

Using the most-advanced technologies, MSK radiation oncologists deliver powerful doses of radiation directly to the tumor with exquisite precision. The approaches we use can reduce the number of sessions required for radiation treatment in comparison with more-conventional approaches, while also limiting the risk of side effects.

Memorial Sloan Kettering has spurred the development and clinical implementation of technologies that are now widely used. For example, in collaboration with our colleagues in Medical Physics, we played a leading role in demonstrating the immense clinical value of intensity-modulated radiation therapy.

We also have spearheaded a number of new clinical initiatives that have enhanced radiation therapy for various types of cancer:

Our radiation team works to offer the highest level of safety during every step of treatment. We collaborate closely with highly trained medical physicists in subspecialized teams to create an individualized radiation treatment plan for every patient. Radiation therapists are present during each radiation procedure to ensure that the correct dose of radiation is being delivered precisely where it’s needed.

Our basic and translational research has focused on understanding the fundamental biological basis of how radiation therapy kills tumor cells, capitalizing on expertise in how the DNA in a cell is repaired and how these processes can be influenced by the surrounding tissues including the blood supply.

Another focus is the optimal combination of precision-targeted systemic therapy with radiation, based on new knowledge of the cancer genome. We know that combining a drug with radiation therapy is not the same as using the drug on its own, and understanding the biological basis for these observations is part of our ongoing research mission. To that end, our SMART program (Selective Mechanistic Augmentation of Radiation Therapy) seeks to translate biological concepts into organized clinical trial evaluations.