Deep bonds are forged between MSK’s specialized nurses and their patients during first-in-human trials.

It was Monday, July 2, 2018, and the early morning air in Manhattan was humid, thick with anticipation for the upcoming Independence Day holiday. Memorial Sloan Kettering clinical trials nurse Kristen Clemens arrived at the Rockefeller Outpatient Pavilion and grabbed a free, if not delicious, cup of coffee from the vending machine before checking email and running through her list of patients for the day.

For eight years, Ms. Clemens worked as an inpatient nurse, caring for people in the hospital as they recovered from surgery and underwent cancer treatment. But in 2017, she joined the ranks of a specialized nursing team at MSK that’s responsible for caring for patients who enroll in first-in-human clinical trials. These studies are the first time a new drug is given to a human being, so the relationships between nurses and patients take on an added level of trust and partnership.

“First-in-human trials are done to establish a standard therapeutic dose of a new cancer drug and to make sure it’s safe and effective in people,” says Ms. Clemens. “That means that my patient could be one of a handful of humans — or maybe even the very first human — to receive what could become the next blockbuster cancer treatment. It is really special when someone volunteers to participate. For me as a nurse, it adds an entirely different dimension to the time we spend together, especially in the moments when they receive their very first dose.”

As she prepared to see her first patient that July day, Ms. Clemens confirmed, again, that everything was ready: the other nurses knew what to expect, the research assistants were looped in, the infusion was ready and waiting to be picked up from the pharmacy. This drug was known for causing an infusion reaction, so there was a plan for that, too. 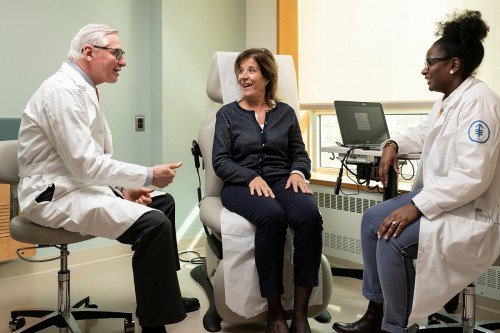 Ms. Clemens entered the exam room to see her patient, a woman in her 50s. She had recently come to MSK with a stage IV lung cancer diagnosis to get a second opinion on her treatment options. She’d already undergone chemotherapy and radiation and, after careful consideration, had decided her best option was to participate in a clinical trial. She would become one of the first people, and the first MSK patient, to receive a new kind of treatment: a cancer vaccine made from the tissue of the lung tumor that was threatening her life. “Unlike preventive vaccines, such as the one you get to protect from the flu, this trial uses a therapeutic, or treatment, vaccine. It is an injection of a small amount of the thing that makes you sick. This triggers the immune system to recognize what cells to go after and kill,” Ms. Clemens says.

Three months prior, MSK interventional radiologist Yolanda Bryce had taken a needle biopsy of the woman’s lung tumor. Next, the MSK research team led by medical oncologist Matthew Hellmann prepared and sent the small tissue sample to a lab in Germany, to create a vaccine designed to attack and destroy the patient’s cancer.

When the time came for the infusion, Ms. Clemens turned to her patient. “Are you ready to do this thing?” she asked.

“At some point, medicines that have shown great promise in the lab have to be given to humans,” says Eytan Stein, Director of the Center for Drug Development in Leukemia at MSK. “We are very lucky to have such a world-class team of doctors, nurses, and researchers, people with the expertise to take care of our patients who volunteer to be part of first-in-human clinical trials here at MSK, which has one of largest programs in the country.”

Every year thousands of patients participate in clinical trials at MSK. “Some patients are sent to us because they have exhausted the standard treatment options for their cancer,” says Dr. Stein. “But we encourage our patients to consider a clinical trial from the very start of treatment if there’s one that’s right for them. This allows patients the opportunity to receive the most-advanced cancer treatments available, sometimes years before they’re offered anywhere else.”

At some point, medicines that have shown great promise in the lab have to be given to humans.
Eytan M. Stein hematologic oncologist

They monitor patients to treat new symptoms early, and quickly, so patients can remain on a treatment longer if it’s effective. If side effects become too intense, or if the drug is not working, the dose is adjusted or the medication is stopped, especially if the cancer is getting worse.

“Without nurses, I wouldn’t be able to do my job,” Dr. Stein says. “Nurses assess and help manage toxicities, and coordinate the tests that are crucial to understanding how these new drugs affect patients. They make sure that patients understand their treatment and receive the support they need to successfully participate in the clinical trial.”

Treating patients in clinical trials is Stephanie Hicklin’s specialty. “I wanted to be a clinical trials infusion nurse because we are at the forefront of cancer research while still providing direct patient care,” she says. To provide that care, Ms. Hicklin must quickly learn every trial protocol. This detailed guide of how to run a study includes how much of the drug to administer and the timing of follow-up tests, such as blood work.

“It can sometimes be scary for patients and their families because they don’t know how they’re going to react or if it is even going to work,” Ms. Hicklin says. “But I remind them that the whole team will be here every step of the way supporting them through it.”

Robert Rose, 67, sees Ms. Hicklin every other Friday in the Developmental Treatment Unit on the fourth floor of the Rockefeller Outpatient Pavilion. He has kidney cancer and is participating in a unique first-in-human immunotherapy trial that combines nivolumab (Opdivo®), which is approved to treat advanced kidney cancer, with an investigational drug called IL-10, which he injects into his belly every day. During each visit, Ms. Hicklin takes his vital signs, draws blood, and performs any other lab tests requested, such as an EKG.

They also do a little catching up. “We talk about who’s expecting a baby, what’s going on with each other’s families,” says Robert.

Then it’s time for him to go upstairs for his checkup — where, thanks to the close collaboration among the clinical trials team, Ms. Clemens already has his results.

“Do you have any new symptoms?” Ms. Clemens asks while she examines Robert. She also inquires about his existing side effects. How’s the fatigue level? Still feeling unusually cold?

Ms. Clemens notes that there can be disappointments in first-in-human trials. The first MSK patient on the personalized cancer vaccine trial was taken off the study after her lung cancer progressed and is exploring other treatment options with her doctor. But other patients on the same trial are stable, with no additional cancer growth, Ms. Clemens reports. Robert is thriving on his trial, too.

“He is back to gardening and growing tomatoes,” Ms. Clemens says. “His tumors shrank or disappeared, and he was able to see his daughter get married a few months ago.”

Still, successes with first-in-human clinical trials are few and far between, which makes it challenging to find the funding. “Philanthropy plays a crucial role in getting first-in-human trials off the ground, especially for rare diseases for which large pharmaceutical companies may not be focusing their efforts,” Dr. Stein says.

“There are never any guarantees that a treatment will work for everyone, but the hope that it might help someone really bonds me to my patients in a deeper way,” says Ms. Clemens. “Without these patients, discovering new medications wouldn’t be possible. They’re very brave.”

Ms. Hicklin is proud to be on the front lines of potential breakthroughs with her patients and fellow nurses. “Clinical trials are providing more treatment options for patients, helping people live longer, and ultimately bringing us closer to a cure. The work that we are doing is changing the future of cancer care,” Ms. Hicklin says. “And that is a really cool thing to be a part of.”