A person’s body image can change during and after cancer treatment. But support is available. One MSK social worker shares common concerns and how people can find healing and hope.

Even after the surgery is over, the last chemotherapy infusion has been given, and the radiation bell has been rung, anyone who has had cancer knows that the experience isn’t over. That’s why Memorial Sloan Kettering offers survivorship support services to help people navigate their new world. One such service is Embodied: Coping with Cancer and Body Image Changes, a support group for men and women who experience the physical changes that can come as a result of cancer and its treatment. Led by MSK social worker Rachael Goldberg, Embodied meets as both large and small groups throughout the year. The group is open to anyone who is currently receiving treatment or has finished treatment.

Some people might feel like they aren’t allowed to have feelings about their bodies after cancer. They might think they should simply be happy that treatment is over. But that’s not a full picture of the cancer experience, Ms. Goldberg says. In an interview, she spoke about body image after cancer and why it’s an important component of recovery.

Why is it important for people who have gone through cancer to talk about body image?

We usually think about relationships in terms of our connections with other people. But it’s also important to recognize that we have a relationship with ourselves and our bodies, a relationship that needs just as much attention, nurturing, and care. Many people have complex relationships with their bodies before cancer. It is a topic that is not commonly talked about during or after treatment. It is normal to feel that your body has changed because of your cancer experience, even if you look exactly the same as you did before treatment. This can be really hard for other people to understand or empathize with.

We're here to help people begin to repair the relationship they have with their bodies.
Rachael Goldberg

Our groups use principles grounded in acceptance and commitment therapy. This approach helps people learn how to stop avoiding, denying, and struggling with their inner emotions. Instead, they accept that these deeper feelings are appropriate responses to certain situations, ones that should not prevent them from moving forward in their lives. We’re here to help people begin to repair the relationship they have with their bodies.

What common experiences or shared sentiments do people bring to the group?

We know about the temporary changes people go through — like hair loss, weight loss, or weight gain — but there can also be permanent changes, which many people do not expect. These changes can be visible, semivisible, or invisible. People might have a change in their physical appearance, such as scarring, changes in weight, prostheses, lymphedema, or ostomies. A semivisible change could be when somebody has difficulty with speech. An invisible change could be a difference in someone’s sexual function or the development of neuropathy.

There can be a lot of complex emotions associated with these changes. Some people report few issues adjusting, while others may feel angry, depressed, or anxious. No matter what feelings come up for you, it is important to leave space to grieve the loss associated with these changes and allow time to adjust to post-treatment changes. Many people don’t think they need to grieve the loss of the person they were before cancer because they are expected to just go through treatment and accept it. One of the things we frequently talk about in our group is how you can be grateful that you survived cancer and you can also be frustrated, sad, and angry about the changes that have happened. A lot of people think you have to feel one way or the other, but we suggest leaving room for both.

Sexual Health
You may experience changes in your sexual health related to cancer and its treatments. Our experts — including doctors, social workers, and psychologists — provide personalized care to address your concerns.
Learn more
Back to top

Do men and women grapple with different issues?

We commonly think of body image issues as women’s issues, but that’s not true. The men and women who come to our group are often experiencing similar challenges and feelings, although they sometimes present in different ways. It is as normal for a man to have difficulty adjusting to his postcancer body as it is for a woman. The men who come to our group are equally affected by changes in weight, sexual function, scarring, and physical abilities as the women. During our last group, one male participant shared that he used to be very fit and now is unable to walk five blocks without becoming short of breath. He was angry that he wasn’t going to be able to function in the way he had prior to treatment and was craving a space to talk about that. Everyone in the group could relate and connect to that feeling, regardless of their gender.

What steps can a person take to heal their relationship with their body after cancer?

Allow yourself time to explore the changes you’re experiencing and be honest with yourself about the feelings that come up around them. Remember, it’s not wrong to have these feelings, and you don’t have to hold them inside. Pay attention to the ways you are talking to yourself about your body, as the language we use to describe our experience can be very impactful. It is easy to focus on the things we can no longer do and get stuck in feelings of deficit. For example, if you used to be a runner and you can’t run anymore, it can be helpful to acknowledge the loss while also asking yourself, What are the things I can do? It takes practice, but it can help you find balance and begin to adjust. For some people, it can be helpful to engage in mindfulness activities or journaling, in an effort to break the cycle of negative thought patterns. It is also important to find people you can talk to about your feelings, whether it’s family, friends, your doctor, an MSK social worker, a support group, or a local therapist. 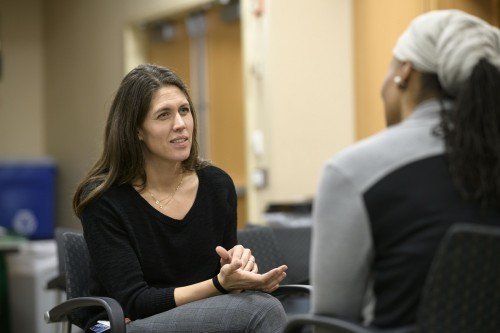 Social Work Support Groups
At Memorial Sloan Kettering, we offer multiple support groups to help people with cancer and their caregivers. Read more about the support groups.
Learn more
Back to top
Navigate this article