Their research showed how evolution and natural selection influence CH and the effects that it may have on health outcomes. CH is relatively common in older people, affecting up to 10% of the population by age 80. The condition raises the risk of developing blood disorders — including some blood cancers — and cardiovascular disease.

“One of the issues that we face in studying something complicated like CH is the interplay of many different factors,” says Dr. Morris, who is co-senior author of a paper on CH published August 13, 2021, in Nature Communications. “AI could eventually give us the tools to guide clinical decisions.” 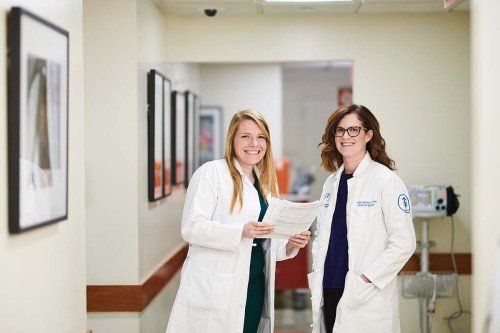 A Condition that Affects Blood Cells

Hematopoietic stem cells are cells that will eventually develop into different types of blood cells. In people with CH, some of these hematopoietic stem cells instead form a group of cells that is genetically distinct from the rest of their counterparts. Some of these subsets of cells, or “clones,” may contain mutations linked to cancer. This process can eventually lead to problems.

The presence of these mutations in the blood doesn’t mean that the person carrying them has or will definitely develop cancer, but studies have shown that people with CH are at higher risk of developing certain blood cancers, especially myelodysplastic syndrome and acute myeloid leukemia (AML). They are also at increased risk for cardiovascular disease, heart attacks, and strokes.

In January 2018, Memorial Sloan Kettering Cancer Center launched a clinic for cancer patients found to have CH. The clinic provides these patients with regular monitoring for signs of blood cancer and regular screening for cardiovascular disease risk. Early detection of cancer or heart disease allows doctors to step in right away with a treatment plan. The clinic also has an important forward-looking research component: trying to understand which patients with CH are at highest risk of future health problems.

In the current study, the researchers looked at how different CH-related mutations interact with each other to increase or decrease the chances that a cancer-causing clone will eventually rise to dominance and progress become to cancer.

“This type of research requires complex statistical models,” says Dr. Morris, a member of the Computational and Systems Biology Program. “Deep learning and neural network techniques are AI methods that can help us to make inferences about what’s going on in this population of hematopoietic cells and study the interplay of different subsets of cells.”

The hope is that AI can help us make sense of patterns that are so complex that we'd never be able to see them on our own.
Quaid Morris computational biologist

The researchers used blood samples collected as part of the European Prospective Investigation into Cancer and Nutrition, an ongoing, multicenter study that has medical information on about 65,000 people spanning almost three decades. The analysis of blood samples with CH included 92 samples from people who eventually developed AML and 385 controls (people who did not have AML).

This research was done in collaboration with scientists at the Ontario Institute for Cancer Research (OICR) and the University of Toronto, where Dr. Morris worked before coming to MSK. The co-senior author, Philip Awadalla of OICR, is an expert in population genetics, a field that focuses on how genes change in response to evolution and natural selection.

A Focus on Cancer Prevention and Early Detection

Dr. Morris says data collected through MSK’s CH clinic will make this kind of analysis much more precise and potentially more useful going forward. “The data we used in the current study was retrospective and taken from a single snapshot in time,” he explains. In contrast, he notes, the CH clinic is collecting multiple samples from the same patients over months or years. “This means that models we build with this data will be more informed and more effective at studying patterns over time and help us to make better predictions,” he adds.

CH research is an important component of calculating and understanding cancer risk, a major goal of MSK’s Precision Interception and Prevention Program. The objective of this approach is to either prevent cancer from occurring or stop it at the earliest stages, when it’s easier to treat.

“The hope is that AI can help us make sense of patterns that are so complex that we’d never be able to see them on our own,” Dr. Morris says.

This work was supported by the Ontario Ministry of Research and Innovation, a Frederick Banting and Charles Best Canada Graduate Scholarship from the Canadian Institutes of Health Research, a Terrence Donnelly Center Cecil Yip Award, the Vector Institute for Artificial Intelligence, and a Natural Sciences and Engineering Research Council of Canada Award. Dr. Morris is supported by a Canadian Institute for Advanced Research Artificial Intelligence Research Chair, National Institutes of Health grant P30 CA 008748, and core funding from Memorial Sloan Kettering Cancer Center.

MSK Opens New Clinic to Monitor People with a Genetic Risk for Developing Blood Cancer
Why Do Certain Chemotherapies Increase the Likelihood of Blood Cancer?
What Causes Leukemia after Breast Cancer? Research Shows That a Mutation May Be Present All Along
The Quaid Morris Lab
Precision Interception and Prevention (PIP) Program
About Clonal Hematopoiesis (CH)