The ability of doctors to match the correct treatment to a patient’s cancer just took a major step forward, when a genetic variant database developed at Memorial Sloan Kettering Cancer Center became the first to achieve partial recognition from the US Food and Drug Administration (FDA). That recognition, which came on October 7, 2021, means that MSK’s database, called OncoKB®, is considered a scientifically valid tool to interpret the usefulness of tumor mutations for predicting drug responses.

Nearly two decades ago, when doctors began performing the first genomic tests for a few types of cancer, interpreting the results from those tests was straightforward. For people with certain cancers — initially lung cancer and colorectal cancer — a handful of familiar mutations indicated that they were likely to respond to drugs designed to target those mutations.

With the advent of more advanced DNA sequencing technologies, which analyze hundreds of cancer-associated genes or even the whole genome, there’s been exponential growth in the number of cancer-causing and potentially targetable mutations that are discoverable in tumors. A single tumor or blood sample can contain thousands of mutations in hundreds of genes, but only a small number of them are likely to be drug targets. There also has been an explosion in the number of targeted drugs available to treat cancers of all types.

We created OncoKB as a tool to help doctors understand which mutations in a particular gene are important and may predict for sensitivity or resistance to a particular drug.
David B. Solit Director of the Marie-Josée and Henry R. Kravis Center for Molecular Oncology

From the early years of targeted therapy, doctors and scientists at MSK understood that they needed a better way to keep track of which mutations were most clinically relevant for each kind of cancer. To do that, they developed a searchable database, which they named OncoKB. (The “KB” stands for “knowledge base.”)

“There are so many cancer-causing mutations that no one can memorize all of them,” says physician-scientist David Solit, Director of MSK’s Marie-Josée and Henry R. Kravis Center for Molecular Oncology (CMO), which maintains the database. “We created OncoKB as a tool to help doctors understand which mutations in a particular gene are important and may predict for sensitivity or resistance to a particular drug.”

OncoKB is the result of a yearslong collaboration overseen by MSK molecular geneticist Debyani Chakravarty, the lead scientist for OncoKB; Nikolaus Schultz, head of Knowledge Systems in the CMO; and MSK computational oncologist JianJiong Gao.

OncoKB is manually curated by MSK doctors who are experts in a wide range of cancers. It provides a grading scale that classifies each mutation based on four levels of evidence that indicate the strength of the data that supports the use of the mutation as a predictive biomarker. 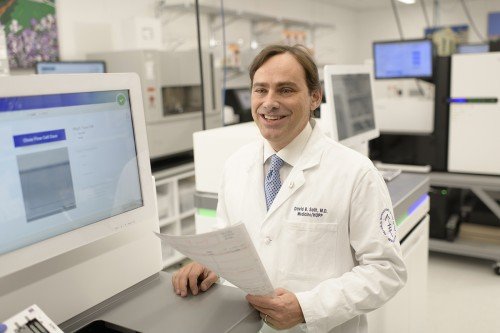 Marie-Josée and Henry R. Kravis Center for Molecular Oncology
This center is a unique and intensive endeavor to transform cancer care through genomic analysis of patient-derived tumors.
Learn more
Back to top

Understanding Which Mutations Are ‘Passengers’ versus ‘Drivers’

Diagnostic tests like MSK-IMPACTTM, which analyzes the genetic changes in solid tumors, and MSK-ACCESS®, which looks for genetic changes in tumor DNA in the blood, have revealed that most tumors contain dozens of mutations. The majority of those mutations are “passengers” — meaning they are just along for the ride and play no significant role in tumor growth. Only a few are “drivers” that directly contribute to the development or spread of cancer.

“After a patient has their tumor sequenced, the first step for their doctor is to determine which mutations in the tumor are the drivers,” Dr. Chakravarty explains. “Once the drivers are identified, the next step is to determine which of them are clinically actionable — which means that they can be potentially targeted with drugs. OncoKB was designed to make these tasks significantly easier.”

Importantly, OncoKB provides information about mutations and drugs as a function of tumor type. A particular mutation doesn’t necessarily respond to the same drug in every type of cancer. This detailed tumor information can help doctors match the right treatment to their patient’s cancer. The FDA’s recognition of OncoKB applies to the processes that OncoKB uses to classify variants as drivers. It also applies to the tumor-type-specific assignment of an OncoKB classification and the FDA level of evidence to specific variants. However, it does not recognize the listing of the specific associated targeted drugs on the website.

We hope that the FDA's recognition of OncoKB will help raise awareness of this valuable resource so that many more patients can ultimately benefit from it.
Debyani Chakravarty molecular geneticist
Back to top

Expanding the Use of OncoKB Nationwide

Applications for OncoKB go beyond the mutations found in a patient’s tumor cells. The database is also useful for studying hereditary mutations that are passed down in families (called germline mutations). In June 2021, Dr. Chakravarty and MSK medical oncologist Zsofia Stadler published a study in the Journal of Clinical Oncology that looked at how OncoKB can be used to guide therapy for patients whose cancers are caused by inherited mutations. This includes treatment with a family of drugs called PARP inhibitors, which are effective against cancers that arise in people who have hereditary mutations in the genes BRCA1 and BRCA2.

For patients who have their cancer sequenced at MSK, information from OncoKB helps doctors translate the findings from MSK-IMPACT and MSK-ACCESS into clinical recommendations. This is also the case for patients who receive either of these tests through a hospital that’s a member of the MSK Cancer Alliance.

Since December 2019, doctors working at other hospitals have been able to license OncoKB for use for their patients, even those who have had a different diagnostic sequencing test. Scientists who use the database for academic lab research can do so for free.

“These agreements allow us to share MSK’s expertise with those who otherwise would not have access to it, especially if they don’t live in the New York City area,” Dr. Chakravarty explains. “We hope that the FDA’s recognition of OncoKB will help raise awareness of this valuable resource so that many more patients can ultimately benefit from it.”