The Paul Marks Prize for Cancer Research, first awarded in 2001, recognizes promising scientists who have made important contributions to the study of cancer.

Memorial Sloan Kettering has named three investigators as the recipients of this year’s Paul Marks Prize for Cancer Research. The award recognizes promising scientists for their accomplishments in the area of cancer research.

The winners for the 2019 Paul Marks Prize for Cancer Research are Nathanael Gray of the Dana-Farber Cancer Institute and Harvard Medical School, Joshua Mendell of the University of Texas Southwestern Medical Center, and Christopher Vakoc of Cold Spring Harbor Laboratory.

“The body of research represented by this year’s winners touches on three different but equally important areas of cancer research,” says Craig B. Thompson, President and CEO. “Each of the recipients is conducting investigations that will have a major impact on cancer care in the years to come.”

Since it was first presented in 2001, the biennial Paul Marks Prize for Cancer Research has recognized 31 scientists and awarded more than $1 million in prize money. The award was created to honor Dr. Marks, President Emeritus of MSK, for his contributions as a scientist, teacher, and leader during the 19 years he headed the institution.

The prize winners were selected by a committee made up of prominent members of the cancer research community. Each recipient will receive a medal and an award of $50,000 and will speak about their research at a scientific symposium at MSK on December 5. 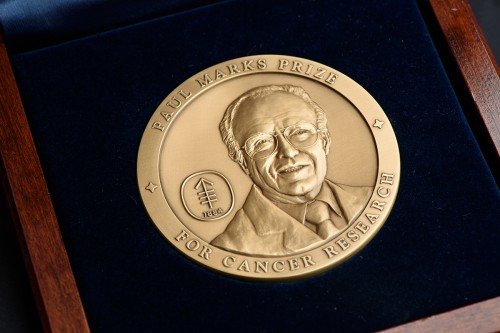 Paul Marks Prize for Cancer Research
The Paul Marks Prize for Cancer Research is intended to encourage young investigators who have a unique opportunity to help shape the future of cancer research. Named for the late Paul A. Marks, who served as President of Memorial Sloan Kettering for nearly two decades, the prize is awarded to up to three investigators every other year.
Learn more

“The analogy used with conventional targeted therapies is that the drug is a key and the protein is a door that can be unlocked,” he says. “But what happens when you have a door with no keyhole and no combination? The only way you can get rid of the door is to blow it up. That’s the degradation approach.”

Most medicinal chemists work either at a drug company or in a chemistry department, but Dr. Gray sees great value in working at a cancer center. “This is the most valuable environment I could be in,” he says. “I’m collaborating with basic cancer scientists as well as physicians. All of us are focused on the problem of cancer. My job is to figure out which problems are tractable and then figure out an approach for solving them.”

Four drugs that Dr. Gray has had a hand in developing have already been approved by the US Food and Drug Administration or are currently in clinical trials. “We plan to continue working on targets that were once considered ‘undruggable’ by using this protein-degradation approach,” he says.

Dr. Mendell is a professor and the Vice Chair of the Molecular Biology Department at UT Southwestern Medical Center. He is also a Howard Hughes Medical Institute Investigator.

His lab studies noncoding RNAs, which lack the instructions for making proteins. Much of his research focuses on a class of very small noncoding RNAs called microRNAs. “MicroRNAs regulate messenger RNA molecules, which do encode proteins,” Dr. Mendell says. “Over the years, my lab has investigated how these small noncoding RNAs contribute to tumor formation and how they become dramatically reprogrammed in cancer cells.”

One particularly important contribution from his lab was the discovery that MYC, a gene that’s overactive in many human cancers, promotes cancer in part by reprogramming microRNAs to favor tumor growth.

Not all microRNAs in cancer cells have the same function. Some act as oncogenes, meaning that they drive the formation of tumors. Others are tumor suppressors. This means that when levels of the microRNAs go down, tumors are able to form.

Research in Dr. Mendell’s lab has expanded to include the study of other types of noncoding RNAs. “Other classes of noncoding RNAs are much more mysterious, and their mechanisms are more diverse compared to microRNAs,” he says. “We want to understand why our genome is producing so many RNAs that do not encode proteins and what role they may have in diseases, including cancer.”

Dr. Vakoc is a professor at Cold Spring Harbor Laboratory. His research is focused on gene regulation. Specifically, he is determining how certain genes drive cancer growth and looking for ways to disable those genes. “The objective of our research is to figure out how we can use drugs to turn off cancer-promoting genes as a way to eliminate tumors,” he says.

In his lab, Dr. Vakoc performs genetic screening with the gene-editing technique CRISPR to figure out which genes and proteins are most important for cancer. “We systematically subtract each one to learn which of them are vital for sustaining cell growth,” he says. “The idea is that if we find a protein that cancer cells are addicted to, we can look for a way to block them.”

Among his most important discoveries was identifying the protein ZFP64 as an essential factor in the growth of certain types of leukemia. His findings helped illustrate how this protein drives cancer growth and suggested new treatments.

Dr. Vakoc’s lab is currently studying cancer growth in several other kinds of cancer, including pancreatic cancer, lung cancer, and sarcoma. “A lot of our methods are universally applicable,” he says. “It’s been very illuminating for me to compare and contrast how solid tumors behave differently from blood cancers with respect to gene regulation. We’re using a variety of different approaches to develop methods for targeting these genes.”