This wide-ranging effort, which was jointly funded by the National Human Genome Research Institute and the National Cancer Institute, has been completed.

When The Cancer Genome Atlas (TCGA) launched in 2005, the understanding of the genetic changes that drive cancer was much less developed than it is today. TCGA was a joint project funded by the National Human Genome Research Institute and the National Cancer Institute. (The initials of project’s name also represent the four chemical building blocks in DNA: thymine, cytosine, guanine, and adenine.) The study sought to accelerate the field.

In the summer of 2018, after yielding dozens of scientific papers on more than 30 different kinds of cancer, TCGA officially drew to a close. As part of the conclusion of the initiative, investigators published a series of papers on what is called the Pan-Cancer Atlas in April 2018. These studies used genomic data from all of the cancer types that were included in the project. The comprehensive report details how, where, and why tumors form throughout the body.

“TCGA generated the gold standard for how to analyze cancers. It laid the foundation for clinical cancer genomics as we understand it today,” says Memorial Sloan Kettering physician-scientist Marc Ladanyi. In TCGA’s pilot phase, Dr. Ladanyi led one of the project’s seven Cancer Genome Characterization Centers, which was housed within MSK’s laboratories. Each center focused on performing a different kind of analysis. Dr. Ladanyi also made important contributions to the study of several types of cancer within the project.

“Now when we study patients’ tumors, we can go back to these data sets,” he adds. “They help us interpret what we find.”

TCGA generated the gold standard for how to analyze cancers.
Marc Ladanyi physician-scientist

Laying the Groundwork for Clinical Testing and Research

With data from TCGA, scientists were able to develop tests that help doctors analyze patients’ tumors. These tests include MSK-IMPACT™. This next-generation sequencing-based panel matches patients with the existing therapies or clinical trials that are most likely to benefit them. Data from TCGA suggested to researchers which genes should be included in the test. Eventually, 468 genes were selected in the panel. MSK-IMPACT obtained authorization from the US Food and Drug Administration in 2017.

One important aspect of TCGA is that all of the data from the project were immediately available to other researchers and the public, says MSK computational biologist Nikolaus Schultz. He was involved in TCGA from its earliest stage. “If you look at the number of times that publications from this project have been cited, it illustrates how important its contributions have been,” Dr. Schultz notes.

Funding from TCGA enabled the establishment of the cBioPortal for Cancer Genomics. This online platform allows scientists to review the data through various visualization and analytical tools. The cBioPortal currently hosts more than 200 data sets from large-scale genomic studies, including all of the data from TCGA. Users can probe data across genes, samples, and data types, thereby making important contributions to research not only at MSK but at other centers around the world.

Mesothelioma: Last but Not Least

The final TCGA paper, on malignant pleural mesothelioma, was published in the December 2018 issue of Cancer Discovery. Malignant pleural mesothelioma is a rare cancer. It affects the lining of the chest cavity and is usually linked to asbestos exposure. There are few good treatments for this cancer. Having an improved molecular understanding of what drives it is likely to lead to better therapies.

“We found several things that were quite interesting and novel,” says Dr. Ladanyi, who was a senior author on the study. The researchers performed in-depth analysis of 74 tumor samples. Many of the tumors carried changes that suggested they might respond to types of immunotherapy still under development.

An editorial that accompanied the publication of the paper noted that the study provided the scientific rationale for new targeted therapy options. 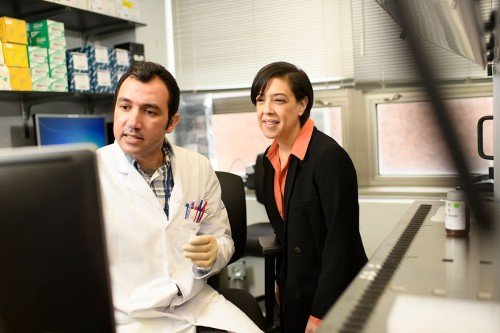 MSK-IMPACT: A Targeted Test for Mutations in Both Rare and Common Cancers
MSK-IMPACT® stands for integrated mutation profiling of actionable cancer targets. It is a targeted tumor-sequencing test available to MSK patients.
Learn more
Back to top

From the beginning, MSK investigators played a leading part in TCGA. Harold Varmus, who was president of MSK at the time TCGA launched, led the National Institutes of Health during much of the Human Genome Project — the effort to sequence the human genome. He was also a member of the working group that recommended the formation of a similarly wide-ranging project that would focus on cancer genes. That project became TCGA.

In addition to running a TCGA Cancer Genome Characterization Center, MSK contributed samples for 21 different kinds of tumors. In all, 7.2% of the more than 10,000 samples that were ultimately studied as part of the project were from MSK. Researchers at MSK also made major contributions to genomic sequencing and analysis efforts for many individual cancers, including ovarian, endometrial, gastric, colorectal, and prostate, as well as sarcoma, glioblastoma, and mesothelioma.

“It’s noteworthy that such a large number of samples were profiled in so many different ways. It helped us better understand all the different kinds of changes that can contribute to cancer,” says Dr. Schultz, who was senior author of the flagship Pan-Cancer Atlas paper related to oncogenic signaling pathways.

“The scope of TCGA may not be replicated again anytime soon,” he concludes. “It’s such a valuable data set that continues to become more and more valuable over time.”