Cell biologist Philipp Niethammer left the camera running while he went to get a cup of coffee. Aimed at tiny zebrafish bathing in a translucent dish, the camera was recording the movements of immune cells as they migrated through the fish’s tail fins toward the tip of a pipette. This slender tube emits chemicals that the cells follow like breadcrumbs.

Dr. Niethammer is a kind of molecular fisherman. He is hoping to hook the signals that cells use to communicate with their neighbors and warn each other of danger. These signals are key to how animals, including us humans, detect wounds.

Dr. Niethammer usually films his zebrafish for just a few minutes at a time. But in this case, the camera kept rolling for nearly an hour. When he returned with his coffee, he saw that he had captured something extraordinary: a sudden, dramatic wave of tissue swelling and buckling. The reaction spread from the tip of the pipette down the length of the fin.

He’d never before seen something like this in a fish, but it wasn’t entirely unexpected, either. Dr. Niethammer had been trying to capture this type of event ever since a colleague told him about a surprising overlap between the process of wound detection and a particular form of cell death called ferroptosis. But the first hundred times or so he cast his net, it came up empty.

His mind swirling with ideas, Dr. Niethammer raced to share the news with the one person he knew would most appreciate it.

Just down the hall, Dr. Niethammer’s colleague, cell biologist Mike Overholtzer, was watching his own experiments with cell death, a process that is crucial to life. For example, your hand would look more like a mitten if not for properly timed cell death during embryonic development to create the spaces between your fingers; and our immune system kills infected cells to stop a virus from spreading.

Though Dr. Overholtzer is fascinated by many kinds of cell death, his current focus is ferroptosis. Ferroptosis means “death by iron,” and it depends on a corrosive kind of chemistry — the sort that causes iron to rust. Not much is known about ferroptosis because it was only discovered in 2012, which makes it all the more compelling to him.

Understanding ferroptosis raises intriguing possibilities in medicine. It could explain why injuries such as a heart attack are so damaging: Cell death spreads out from the site of injury and takes out healthy cells too. It also suggests the possibility of using ferroptosis as a cancer treatment — by igniting a controlled burn inside a tumor to destroy cancer cells.

In 2016, Dr. Overholtzer and a colleague from Memorial Hospital, physician-scientist Michelle Bradbury, found that it was possible to trigger ferroptosis in cancer cells by zapping them with a type of pinhead-sized particle called a C prime dot. This caused a deadly chain reaction that spread like a wave through the tumor, killing it completely. They knew C prime dots could cause ferroptosis, but they didn’t quite understand how ferroptosis worked — or how it spread between cells.

That fascinated Dr. Overholtzer. Was there some kind of active signal that conveyed a “death wish” from cell to cell? Or did the spread occur more passively as collateral damage? Fortunately, a world expert in how signals move through tissues was working next door.

The collaboration between Dr. Niethammer and Dr. Overholtzer began as do many at the Sloan Kettering Institute: a conversation over coffee.

“Wouldn’t it be cool if we could get a death wave to occur in a fish?” Dr. Overholtzer said to his colleague one day back in 2018. It sounded far-fetched — and a bit macabre — but there were good reasons to explore the idea.

“The chemistry behind ferroptosis and the chemistry of wound detection are similar and overlapping,” Dr. Niethammer says. “Both rely on iron and reactive chemicals called free radicals, and both spread quickly like a wave.”

If ferroptosis could be elicited in a healthy fish, it would mean that this form of cell death is more than just a destructive consequence of disease — it could be built into the way the body has evolved to protect itself.

The two scientists hashed out their ideas over the next several weeks and then got to work. While Dr. Niethammer perfected a mechanism for delivering precise amounts of inflammation-promoting chemicals to the tail fin of a zebrafish, Dr. Overholtzer and his lab took an in-depth look at what happens inside a cell that is undergoing ferroptosis. A graduate student in the lab, Michelle Riegman, found that before a cell dies, it begins to swell. This swelling, it turns out, is actually what relays the death wish to neighboring cells, rather than the death itself.

“This was really surprising to us,” Dr. Overholtzer says. “We had imagined that the spreadability might be a hallmark of ferroptosis.”

Finding the chemistry of ferroptosis at the heart of wound detection raised still more questions for the scientists: Why would an animal’s immune system rely on a risky method to heal scrapes and cuts? You might think it would have evolved to develop a safer and more foolproof method.

“The way that I think about this volatile chemistry,” Dr. Niethammer says, “is as a kind of trade-off: Yes, it carries a risk, but that risk is outweighed by the benefit of being able to rapidly alert the immune system to danger.”

To sense a wound in a tissue, you're pretty much playing with fire.
Philipp Niethammer Principal Investigator

The scientists reported their results in back-to-back articles in August in the journal Nature Cell Biology. In an accompanying editorial published in the same issue of Nature Cell Biology, colleagues compared the wound-detection situation to a smoke signal that gets out of control and sets the forest ablaze.

“To sense a wound in a tissue, you’re pretty much playing with fire,” Dr. Niethammer says.

The discovery has important conse­quences for how scientists think about the relationship between normal body chemistry and disease: One can very easily slide into the other.

The jointly published papers reflect a strength of the SKI model: “There’s a natural synergy that you get when scientists working in different areas are encouraged to freely share ideas,” Dr. Overholtzer says. “It’s part of what makes SKI such a special place to do research.”

Ferroptosis and Cancer: A New Frontier

What scientists are learning about ferroptosis could translate into new therapies for cancer. That’s because many cancers seem especially vulnerable to this type of cell death. A recent Nature study led by postdoctoral fellow Jiao Wu and graduate student Alex Minikes in Xuejun Jiang’s lab at SKI explains why.

It comes down to connections. Normal cells make snug connections with their neighbors and actively share information through a signaling pathway called NF2-Hippo. They are resilient in the face of chemicals that trigger ferroptosis. Many cancer cells, on the other hand, have lost these connections, so they succumb.

That has excited cancer researchers and drug developers alike. “The idea is that if you can induce ferroptosis in a controlled manner, it might be a great way to treat cancer,” Dr. Jiang says.

The findings have particular relevance to mesothelioma, an aggressive cancer affecting the lining of internal organs that tends to spread quickly. Mesothelioma cells often contain NF2 mutations that aid their spread and make them resistant to many types of chemotherapy. But there is an upside:

More recently, in November 2020, postdoctoral fellow Junmei Yi from Dr. Jiang’s lab and postdoctoral fellow Jiajun Zhu from Craig B. Thompson’s lab published in the journal Proceedings of the National Academy of Sciences (PNAS) another striking connection between ferroptosis and cancer. One of the most commonly mutated signaling pathways in cancer is called PI3K-AKT-mTOR, which plays a role in metabolism. Cancer cells with mutations in this pathway have adaptations that make them more resistant to ferroptosis. The researchers found that by combining drugs that block this mutated pathway with ones that promote ferroptosis, they could dramatically shrink both breast and prostate cancer tumors bearing these mutations in mouse models. 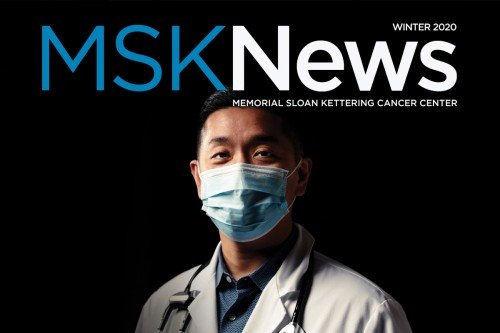 MSK News Winter 2020
Alexander Drilon is leading the development of new targeted drugs that can control lung cancer better than ever before. Read about his work in our Winter 2020 issue.
Learn more
Back to top
Navigate this article