MSK investigators have used a lab tool originally developed to study fly nerve cells to study RNA-binding proteins in blood cells from mammals. The technique has allowed them to uncover new clues about acute myeloid leukemia.

If you think of cells as factories for making proteins, and DNA as the instructions contained within those factories, RNA is the workforce that actually carries out the manufacturing. Understanding how RNA does its job is essential for figuring out what goes wrong in many diseases, including cancer.

To take the analogy one step further, RNA-binding proteins (RBPs) are tools that RNA uses in the production process. There are more than 1,500 RBPs in any given cell, which creates a challenge for scientists who want to study them on an individual basis. But researchers are looking for ways to overcome this hurdle because RBPs are an important target for the development of new drugs.

In a paper published April 24 in Nature Communications, Sloan Kettering Institute cancer biologist Michael Kharas, members of his laboratory, and collaborators in the lab of computational biologist Christina Leslie describe a new tool for studying RBPs. In addition to having broad applications for a range of cell types, the team reports that this tool has already uncovered details about one particular RBP, called Musashi-2. Musashi-2 helps stem cells in the blood become more-specialized cell types. It is known to be overly active in acute myeloid leukemia (AML) cells.

“This is an exciting study because it changes how we study RBPs,” Dr. Kharas says. “It also changes what we know about how they function in specific cells.”

Translating a Lab Technique from Flies to Mammals

HyperTRIBE uses a technology that is different from current methods for studying RBPs. Other approaches require millions of cells. The biggest benefit of HyperTRIBE is that it works in rare cells that are available only in very small numbers.

This is an exciting study because it changes how we study RNA-binding proteins.
Michael G. Kharas cancer biologist

“Our study shows that this technique can be used to study RBPs, not just in fruit fly cells but more broadly,” says Dr. Kharas, a member of SKI’s Molecular Pharmacology Program. “This will have global impact for anyone studying RBPs in rare cell populations, whether those are blood stem cells, neurons, germ cells, or other kinds of stem cells.”

New Clues about a Protein’s Role in Leukemia

In the Nature Communications paper, the investigators report that HyperTRIBE has already revealed important findings about Musashi-2 and how it contributes to AML. Dr. Kharas and the other researchers are developing drugs to treat AML that work by blocking Musashi-2, but they still have a lot to learn about how these drugs modify the function of RBPs.

Using this novel tool, Dr. Kharas’s lab learned that Musashi-2 behaves differently in leukemia cells than it does in regular blood stem cells. “We knew that leukemia cells seemed to be more addicted to Musashi-2 for their growth than normal cells,” Dr. Kharas says. “Now we know that’s because Musashi-2 increases its RNA-binding activity and changes how RNA gets translated into proteins in cancer cells compared to normal cells.”

The investigators plan to continue studying why this is the case. Dr. Kharas says it could aid the development of drugs that slow leukemia growth by affecting Musashi-2’s activity while avoiding side effects that could result if Musashi-2 changes the production of healthy cells. “Because HyperTRIBE doesn’t require a large number of cells, we’ll be able to do more experiments to test potential drugs under many different conditions,” he concludes. 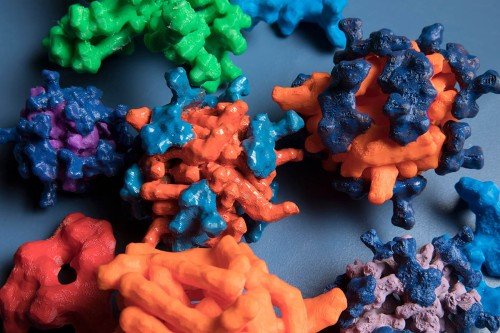 Molecular Pharmacology Program
Our research program serves as a conduit for bringing basic science discoveries to preclinical and clinical evaluation.
Learn more
Back to top

Dr. Kharas is a consultant for Accent Therapeutics, and his laboratory receives some financial support from 28-7 Therapeutics.