People with salivary gland tumors that make an abundance of HER2 respond well to a drug that targets this protein.

Albert Kuchler, 66, is no stranger to the doctors on MSK’s Head and Neck Service. A retired oral surgeon, Dr. Kuchler referred his own patients to the service many times over the years. So it was only natural that he sought out a member of that team, Jatin Shah, when he found an unusual lump in his neck and was worried it might be cancer.

“It was sort of a no-brainer,” Dr. Kuchler says. “I knew Dr. Shah from having worked closely with him for years. He was Chief of the Head and Neck Service then. I called him up, and he saw me the very next day, July 18, 2017.”

The lump was on one of his salivary glands. Most tumors that form in these glands are benign (noncancerous). But pathology tests revealed that Dr. Kuchler had salivary gland cancer.

The recommended treatment for someone with salivary gland cancer is surgery and radiation therapy. Dr. Kuchler had both treatments under the care of a team of MSK doctors, including Ian Ganly, Josh Yamada, Nancy Lee, and Loren Michel. His treatment went well for the first few months, but then a follow-up scan showed that the cancer had spread to his spine and hip. Another round of radiation helped with these spots, but then more cancer turned up in his liver and lung.

This study is a great example of precision medicine, with nearly all of the patients with this rare tumor benefiting.
Bob T. Li medical oncologist

That’s when his doctors recommended he see Bob Li for systemic chemotherapy. Dr. Li is an MSK medical oncologist and drug development physician-scientist who is enrolling people with salivary gland cancer in a clinical trial of a precision medicine called ado-trastuzumab emtansine (Kadcyla®). To be eligible for the study, patients need to have salivary gland tumors making an abnormally large amount of a protein called HER2. The drug acts like a heat-seeking missile: It finds the HER2-amplified tumors and directs a toxic payload right to them.

Dr. Kuchler’s tumor fit the criteria. He enrolled in the study in October 2018.

“Things were not going well for me at that point, to put it mildly,” Dr. Kuchler says. “The cancer was really aggressive and spreading to more and more places.”

But after just two infusions of the drug, scans taken in December 2018 showed that the treatment was working better than anyone could have anticipated. All the tumors had completely vanished, and his bones were already healing.

“I was thrilled, obviously, and so were my doctors,” he says.

More than a year later, Dr. Kuchler still shows no evidence of disease. 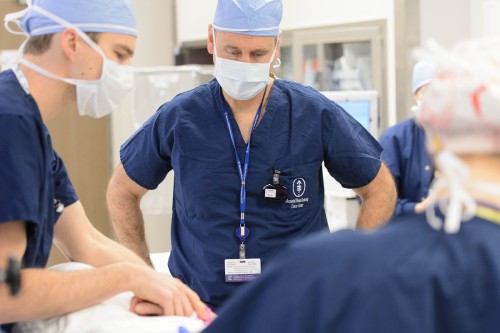 Dr. Kuchler isn’t unusual in responding well to the HER2-targeted treatment. In fact, nine of the first ten people who enrolled in the study have seen their tumors shrink.

“This study is a great example of precision medicine, with nearly all of the patients with this rare tumor benefiting,” Dr. Li says. “The challenge is to find people with HER2-amplified salivary gland tumors. We hope to get the message out to the medical community that there is hope for these patients, and active participation in a clinical trial may be lifesaving.” Dr. Li presented early results of this clinical trial at the 2019 annual meeting of the American Society of Clinical Oncology. He is working closely with head and neck medical oncologist Alan Ho in developing new HER2-targeted treatments for these patients.

As for side effects from the drug, Dr. Kuchler says they’ve been minimal. He experiences a little bit of lethargy and some stamina issues for about a week after the infusion, but then he has two good weeks before heading back in for another infusion. He’ll continue to receive 30-minute infusions every three to four weeks indefinitely. Life goes on much as it did before.

Dr. Kuchler is not quite ready to return to his golf game yet — the torque is too much for his healing spine — but in the meantime, he and his wife of 42 years are currently making renovations to their home in Ringwood, New Jersey.

In February 2013 and May 2019, the US Food and Drug Association approved ado-trastuzumab emtansine for two treatment indications of HER2-positive breast cancer. It is not yet approved for salivary gland cancer. On January 23, 2020, the clinical trial discussed in this article was open but not actively recruiting patients. It is expected to resume recruiting patients in the near future.

Stay Informed
Get the latest news and updates on MSK’s cancer care and research breakthroughs sent straight to your inbox with our e-newsletters.
Newsletter Sign Up

For Some People with Cancer, a Simple Blood Test Can Be a Lifesaver
Liquid Biopsy Is Effective at Guiding Treatment of Lung Cancer, Study Finds
Why KRAS Inhibitors for Lung Cancer Stop Working (and What Can Be Done about It)
Salivary Gland Cancer
Alan L. Ho
Bob T. Li