Neuro-oncologist Ingo Mellinghoff first became intrigued by scientific questions regarding brain tumors while working in the lab of physician-scientist Charles Sawyers before both came to MSK. Now, Dr. Mellinghoff leads MSK’s Department of Neurology as it deploys innovative technologies to understand how these cancers develop and progress.

When neuro-oncologist Ingo Mellinghoff was named Chair of Memorial Sloan Kettering’s Department of Neurology in October 2020, it marked the culmination of a career devoted to studying how cancer affects the brain. Dr. Mellinghoff previously served as Chief of the MSK Brain Tumor Service and Vice Chair of Research in the Department of Neurology as well as its Interim Chair. His research laboratory in the Human Oncology and Pathogenesis Program (HOPP) focuses on how faulty signals in brain cells can lead to the development and growth of brain tumors.

When did you know you wanted to be a doctor and scientist?

I grew up in a small city in Southern Bavaria in Germany. My father was a physician, and I often went with him on house calls. I saw how rewarding it could be to have a positive impact on the lives of others. During medical school in Germany, I secured a one-year scholarship to work in a molecular medicine lab at the University of Massachusetts. That first sparked my interest in scientific work.

After medical school, I went to the University of California, Los Angles (UCLA) for residency. I met Charles Sawyers — now Chair of HOPP at MSK — on the bone marrow transplant service. During rounds, Charles would always challenge us to think about scientific concepts behind the signs and symptoms of the disease that appeared. I was intrigued and joined his lab, first as a clinical oncology fellow and later as a postdoc doing pure lab work. The lab was studying the BCR-ABL protein, a signaling molecule that promotes the runaway growth of chronic myeloid leukemia cells. The targeted therapy imatinib (Gleevec®), which inhibits BCR-ABL, was entering clinical trials. Gleevec became a very successful cancer drug, so I was right in the middle of the first big wave of targeted therapy research.

How did you come to focus on brain cancer?

I had seen what targeted therapy for cancer could accomplish, and I wanted to forge a research area independent of what already existed. I became the only person in Charles’s lab working on brain cancer, and then I started my own lab at UCLA. After Charles came to MSK and started HOPP, I was recruited here in 2007 by him and [MSK Physician-in-Chief] Lisa DeAngelis, who was then Chair of the Department of Neurology. I thought it would be a great opportunity to join this new research program and build bridges to MSK’s outstanding clinical program in cancer neurology. 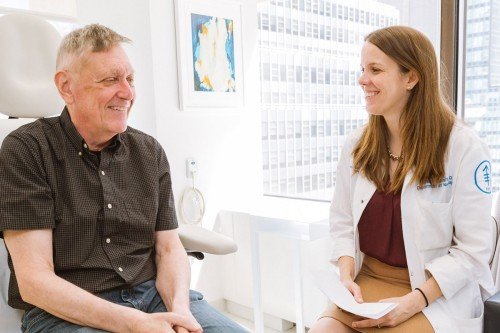 Why have brain tumors been so hard to treat?

There are several serious challenges, both scientific and nonscientific. One obstacle is the unique aspects of the brain, especially its location. To get any piece of tumor tissue to study requires a serious operation. Our neurosurgeons are exceptional, and the complication rate at MSK is very low, but it’s still brain surgery. Another challenge is the blood-brain barrier. Humans have evolved so the brain has a tight seal to protect it from environmental toxins. But this seal also makes it very hard to deliver drugs. Most drugs we are trying in brain cancer are hand-me-downs from other cancer fields that may have worked well against breast or lung cancers with molecular similarities to brain cancer. But getting them past the blood-brain barrier adds another layer of complexity.

For many brain cancers, especially deadly ones like glioblastoma, the track record of developing new therapies has not been good. Also, most brain cancers are rare. For these reasons, many pharmaceutical companies have been reluctant to commit resources. On the other hand, patients with glioblastoma know that standard therapies don’t work well — the tumor often comes back — and they urgently need new treatments. There is a high demand for new therapies but a poor supply.

One of the advantages of rising through different layers of an institution is seeing that sense of mission at all levels.
Ingo K. Mellinghoff Chair, Department of Neurology
Back to top

What is key to understanding how these tumors develop and progress?

We’re creating better experimental models to study brain tumors. In the last few years, my lab has worked with the Brain Tumor Center, led by Luis F. Parada, to develop more than 100 patient-derived xenograft models — these are patient brain tumor samples placed in mice. This lets us study the circuity of brain cancer cells and how they respond to specific therapies. Dr. Parada’s group has also created genetically engineered mouse models that develop brain cancer spontaneously.

Viviane Tabar, Chair of the Department of Neurosurgery, is developing models derived from pluripotent stem cells, which can give rise to all cells of the body’s tissues. These can be grown readily in the dish, and under specific experimental conditions, can give rise to highly differentiated cells and even “mini brains.”

While each of these models have limitations, they beautifully complement each other, and we can learn important lessons by using them together. Along with human tumor biopsies, we believe these models will enable us to understand the causes of brain cancer and test which treatments will work.

How can you tell if a therapy is working?

We are developing better biomarkers to monitor how brain cancer is progressing or responding to treatment. For example, together with geneticist Michael Berger and colleagues in the Department of Pathology, we recently found that we can analyze spinal fluid from brain cancer patients to understand the genetic changes occurring in a brain tumor. We are also closely collaborating with our colleagues in the Department of Radiology to improve the detection and monitoring of brain cancer. For example, we are currently working with neuro-radiologist Robert Young to better measure the growth of low-grade gliomas. We are also collaborating with radiochemist Jason Lewis and nuclear medicine physicians Heiko Schöder and Neeta Pandit-Taskar on technology that allows us to track immune cells as they move into brain tumors. This could be a powerful tool for developing immunotherapies.

What is potentially the most promising advance for brain cancer in the near future?

For low-grade gliomas, which are slow-growing tumors that usually arise in younger people, there are drugs called IDH inhibitors that look promising. These targeted therapies have already shown activity against other cancers, and a phase III randomized international trial is now testing them against the earliest stage of these gliomas. Even though we call them low-grade, these tumors are far from a low-grade problem. They are incurable. IDH mutations are present in 80% of these tumors, so if IDH inhibitors prove to be effective, we may be able to delay the need for radiation or chemotherapy for many patients.

For primary and metastatic brain tumors, there are many exciting new drugs in development. For most of these tumors, I believe that the development, rigorous testing, and thoughtful incorporation of what is called “-omics” technologies — which allow us to study the DNA, RNA, and proteins of brain cells and how they interact — is key to determining which patients may benefit from potentially effective treatment approaches.

If you hadn’t become a doctor and scientist, what would be your ideal alternative career?

When I was younger, I enjoyed spy and mystery novels and imagined myself in the role of a diplomat. I obviously took a more conservative route for my career, but I still have an abundance of curiosity.

What makes you excited to come to work each day?

I find it very fulfilling to have one foot in the lab and one foot in the clinic. But what really makes work at MSK exciting is the people. There is such a deep commitment to finding cancer earlier and treating it more effectively to improve the lives of our patients. One of the advantages of rising through different layers of an institution is seeing that sense of mission at all levels. It’s amazing. Yesterday, I was still in the clinic at 8:00 p.m. and others were staying as well. Nobody ever says, “I’ve got to go.”