The level of genetic mutations in a tumor, called tumor mutational burden (TMB), has been used to predict how people with cancer will respond to immunotherapy. But MSK physician-scientist Luc Morris explains that important aspects of TMB’s clinical relevance have needed clarification.

Beginning in 2014, Memorial Sloan Kettering researchers made a series of groundbreaking discoveries about the relationship between the genetic mutations in cancer cells and immunotherapy. They found that tumors with a large number of mutations — a characteristic known as high “tumor mutational burden” (TMB) — responded better to immunotherapy drugs called checkpoint inhibitors.

Two early breakthrough studies were led by MSK physician-scientist Timothy Chan. (Dr. Chan moved from MSK to the Cleveland Clinic in 2020.) One study showed the correlation in melanoma, and the second established the same relationship in non-small cell lung cancer. These were the first cancers — which often have high TMB — to be successfully treated with checkpoint inhibitors. Then in 2017, studies headed by physician-scientist Luis Diaz, Jr., led to the US Food and Drug Administration’s approval of checkpoint inhibitors for tumors with defects called mismatch repair (MMR) deficiency, which causes higher TMB. 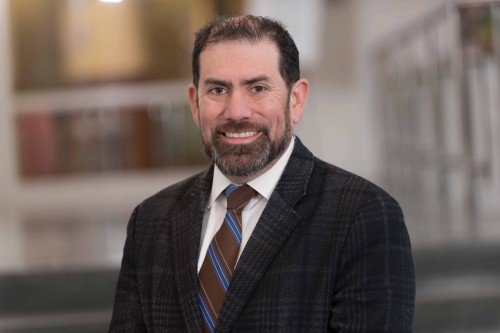 The Science Behind the FDA’s Approval of an Immunotherapy for Mismatch Repair–Deficient Cancers
A new paper from MSK physician-scientist Luis Diaz presents the evidence on which the FDA approved the immunotherapy drug pembrolizumab for cancers with a specific genetic abnormality.
Learn more

In 2019, research led by MSK physician-scientists Luc Morris, Dr. Chan, and David Solit, confirmed that this relationship between TMB and immunotherapy effectiveness held true across many other cancer types: Among those receiving checkpoint inhibitors, people whose tumors had high TMB lived longer.

But questions remained: Does high TMB really make checkpoint inhibitor drugs work better? Could TMB be a feature of tumors linked to better outcomes, even if not treated with immunotherapy? And how could TMB be useful for clinical practice — should doctors prioritize these drugs for people based on a single TMB level in their tumors?

Recently, Dr. Morris led three related studies on TMB addressing these questions. He discusses how the findings shed light on TMB and how they can be better used to guide treatment.

Why are there still doubts about TMB and what it means for immunotherapy?

We began to realize that TMB’s usefulness as a biomarker for making treatment decisions was based on some assumptions that had not really been proven. For example, how can we be sure that high TMB is not just a marker of a less aggressive cancer in general — is that why patients with high-TMB tumors do better? What does TMB mean in a tumor that doesn’t get immunotherapy treatment?

How do you separate TMB from the context of immunotherapy treatment?

That was the question we sought to answer in a study published January 4, 2021, in Nature Genetics. Initially, it was challenging to figure out how to design our study to answer this question. Biostatistician Venkatraman Seshan, who co-led the study, designed a way to analyze the data and produce meaningful answers. It involved separating out the data from patients before checkpoint inhibitor therapy, compared with afterwards. We found that high TMB does not always mean a better prognosis for the patient. It’s only favorable if they are being treated with checkpoint inhibitors. Otherwise, it’s more a marker for having a worse outcome.

That was an important piece of the puzzle that was missing. I have great pride in MSK because this study took advantage of many unique aspects of our center. We involved many researchers bringing expertise in many different cancer types, and we relied on MSK-IMPACT™, sequencing tumors from 10,000 patients. We collaborated with colleagues in the Center for Molecular Oncology and were able to leverage the incredible array of genomic data and clinical data from these patients to find the answer.

In many ways, the cancer field has accepted TMB as a feature of tumors that is informative, but we are only beginning to understand its strengths and limitations.
Luc G. T. Morris physician-scientist
Back to top

How can doctors best use TMB to decide whether immunotherapy is appropriate?

Last summer, the FDA gave accelerated approval to the checkpoint inhibitor pembrolizumab (Keytruda®) for all tumors exceeding a certain TMB level. This was called a tissue-agnostic approval, meaning it applied to any solid tumor with this genetic feature, regardless of cancer type. It was a bit surprising the FDA picked one universal number for the cutoff. That number was ten mutations per megabase (we’ll just call it ten for the sake of simplicity). Our 2019 study suggested this might not be a good approach — that the TMB number that separates out people who respond to these drugs versus those who don’t varies quite a bit for different cancer types.

We wanted to see how the FDA-approved cutoff of ten mutations performed in the real world. We analyzed more than 1,600 patients who received checkpoint inhibitors. We looked at how they responded to the drugs and how long they survived: Do patients with a TMB higher than ten have better outcomes than people whose tumors have a TMB below ten?

The answer is yes — but it’s a qualified yes. The universal cutoff works reasonably well for certain cancer types, such as non-small cell lung cancer and melanoma. But it doesn’t hold true for every cancer. For kidney cancer, there were zero cases out of 92 with a TMB more than ten, but they still responded well to the drugs. And for five of 16 cancer types studied, tumor response rates were higher when TMB was below ten, compared with above it. This doesn’t mean the high-TMB concept is wrong. It just shows that if you set the cutoff arbitrarily at a single number, the cutoff may end up in the wrong place.

In addition, tumor response rates are just a rough stand-in for more meaningful results, such as survival rates. We found that this universal TMB cutoff did not reliably identify patients who lived longer after receiving immunotherapy.

The FDA approval was meant to make checkpoint inhibitors available to more patients with many cancer types, and it’s possible there will be positive aspects of that. But you can imagine doctors interpreting the FDA approval as: Prioritize immunotherapy in tumors with TMB above ten and prioritize other therapies when TMB is below ten.

Our study, published in JAMA Oncology on February 18, 2021, suggests that applying a single number to every cancer is not the best approach. Instead, we examined how a cancer type-specific cutoff for TMB would perform, and this seemed to be a much better biomarker in terms of predicting response and survival. We will keep investigating cancer-specific biomarkers with the goal of providing clinicians with more helpful information.

Beyond TMB, are there ways to improve the accuracy of predicting immunotherapy response?

Our third study looked for a biological marker that would be simpler to use than assessing TMB, which requires powerful genetic sequencing technology. A marker that has long been studied in cancer measures the ratio of two types of white blood cells assessed with a routine lab test: neutrophils and lymphocytes. A high neutrophil-to-lymphocyte ratio, or NLR, tends to indicate overall poorer health and correlates with a lower chance of survival in patients with cancer. But until now, it’s not been clear how useful this is for guiding treatment choices, and it has not been examined in the context of immunotherapy.

With Venkat’s help, we looked at NLR ratios in more than 1,700 patients across 16 different cancer types who received checkpoint inhibitors. We found that NLR was a very good predictor of outcome, both for response to immunotherapy and survival. If you plot out how predictive NLR and TMB are, they perform about equally well. And if you combine NLR with TMB, the prediction is even more accurate. We published these results February 1, 2021, in Nature Communications.

What’s great about NLR is that it’s a simple blood test you can do almost anywhere in the world. A lot of clinicians don’t have the resources to do routine tumor sequencing to get TMB. We’ll need further testing to validate whether NLR works for all cancer types, but it’s very exciting to think it’s an option for guiding immunotherapy decision-making without needing expensive tumor sequencing.

What is the overall take-home message from these studies?

In many ways, the cancer field has accepted TMB as a feature of tumors that is informative, but we are only beginning to understand its strengths and limitations. These studies show it’s only useful for patients being treated with immunotherapy, and that you can’t crudely use one TMB number to guide treatment decisions for all cancer types.

All three of these projects were driven by Cristina Valero Mayor, a postdoctoral fellow who worked on them for several years in my lab and is going to be staying on for another year to complete her clinical fellowship training in head and neck surgery here at MSK.

We can truly understand the importance of our scientific discoveries only if we link our science to solid clinical data and statistical methods. In the search for better biomarkers to help us match patients with immunotherapy, TMB is a big part of the puzzle, but to paraphrase Winston Churchill: It’s not the end, or even the beginning of the end, but it might be the end of the beginning.

Dr. Morris is an inventor on a patent held by Memorial Sloan Kettering related to the use of TMB in cancer immunotherapy and reports laboratory research funding from AstraZeneca.