In 2019, MSK clinical researchers made several major discoveries that will improve the treatment of cancer and guide the development of new therapies. Many of these studies were made possible by large and small philanthropic donations, which allow researchers to pursue innovative ideas and take the risks necessary for breakthrough discoveries.

People with pancreatic cancer who have mutations in the cancer predisposition genes BRCA1 or BRCA2 may benefit from a type of targeted therapy called a PARP inhibitor. These drugs work by exploiting a weakness in cancer cells’ ability to repair DNA damage. Medical oncologist Eileen O’Reilly was co-author of a large phase III study showing that the PARP inhibitor olaparib (Lynparza®) is effective in people with metastatic pancreatic cancer (cancer that has spread to another part of the body) who have an inherited BRCA mutation. The finding was published in the New England Journal of Medicine and presented at the annual meeting of the American Society of Clinical Oncology.

The people most likely to respond to immunotherapy treatments tend to have a large number of mutations in their tumors. This quality is called high tumor mutational burden (TMB). Surgeon Luc Morris and physician-scientist Timothy Chan found that the immune system’s response to TMB can be predicted for many cancers. They also determined that what is considered a high TMB varies depending on the type of tumor. 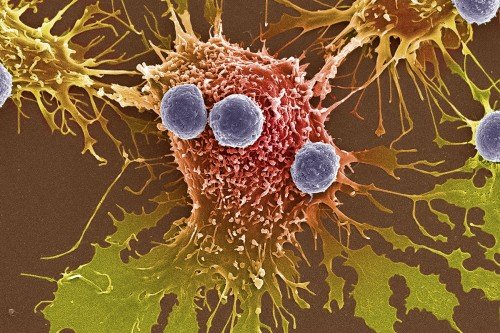 Tumor Mutational Burden Can Help Predict Response to Immunotherapy in Many Different Cancers
Investigators confirmed that people whose tumors have a high tumor mutational burden and were treated with immunotherapy lived longer.
Learn more
Back to top

3. Bacteria Could Fight against Hospital-Acquired Infections

4. Hitting a CAR T Snooze Button Can Avoid a Serious Side Effect

Chimeric antigen receptor (CAR) T cells are a type of “living drug” that can treat aggressive forms of blood cancer. But they can trigger a serious side effect called cytokine release syndrome (CRS). Physician-scientist Michel Sadelain discovered that the leukemia drug dasatinib (Sprycel®) can serve as a temporary off switch for CAR T cells, which could potentially help doctors limit CRS.

Medical oncologist Shanu Modi reported positive results from a phase II clinical trial that showed the effectiveness of an experimental cancer drug called trastuzumab deruxtecan against HER2-positive metastatic breast cancer that has stopped responding to other HER2-targeting drugs. “This disease is so challenging to treat, and the responses we’ve seen so far are amazing,” Dr. Modi says.

This disease is so challenging to treat, and the responses we've seen so far are amazing.
Shanu Modi medical oncologist
Back to top

Wilms’ tumor is the most common type of kidney cancer in children. Cancer biologist and pediatric oncologist Alex Kentsis found that a protein called prohibitin can be detected in high levels in the urine of children with aggressive forms of the disease. This discovery could help identify children at risk for the cancer returning after treatment and help doctors improve therapies.

7. BRCA Mutations that Don’t Cause Cancer

Inherited mutations in the BRCA1 and BRCA2 genes are a known risk factor for several types of cancer. Computational biologist Barry Taylor found that these mutations do not always drive a tumor’s development, though — sometimes they are just along for the ride. The findings have important implications for determining who is likely to benefit from the targeted therapies called PARP inhibitors.

8. Mutations Found in Liquid Biopsies May Not Come from Cancer Cells

Blood tests called liquid biopsies have raised the possibility that diagnosing and screening for cancer could be done through a simple blood draw. Physician-scientist Pedram Razavi, surgical pathologist Jorge Reis-Filho, and medical oncologist Bob Li found that a large proportion of the cancer-related mutations found in liquid biopsies did not come from tumor cells, but rather from alterations in white blood cells. The findings indicate the need for caution when interpreting results from liquid biopsies in which white blood cells were not sequenced at the same time.

The immunotherapy drugs called checkpoint inhibitors are very effective in some people and don’t work at all in many others. Dr. Chan found that inherited genetic variations affect the likelihood of response to these drugs. The findings suggest a new way to determine who is most likely to benefit from immunotherapy.

10. Dangerous Gut Bacteria Feeds on Lactose in the Diet

Infections with the Enterococcus bacterium are a major threat in people who are hospitalized; it can lead to inflammation of the colon and serious illnesses, such as bacteremia and sepsis. Studies have suggested that high levels of Enterococcus increase the incidence of graft-versus-host disease after bone marrow transplants. Physician-scientists Jonathan Peled and Dr. van den Brink showed for the first time that foods containing lactose, a sugar naturally found in milk and dairy products, help Enterococcus thrive in the gut, at least in mice.